How do we determine whether Primo Water Corporation (NASDAQ:PRMW) makes for a good investment at the moment? We analyze the sentiment of a select group of the very best investors in the world, who spend immense amounts of time and resources studying companies. They may not always be right (no one is), but data shows that their consensus long positions have historically outperformed the market when we adjust for known risk factors.

Primo Water Corporation (NASDAQ:PRMW) was in 16 hedge funds’ portfolios at the end of September. PRMW shareholders have witnessed a decrease in activity from the world’s largest hedge funds lately. There were 17 hedge funds in our database with PRMW positions at the end of the previous quarter. Our calculations also showed that PRMW isn’t among the 30 most popular stocks among hedge funds.

What have hedge funds been doing with Primo Water Corporation (NASDAQ:PRMW)? 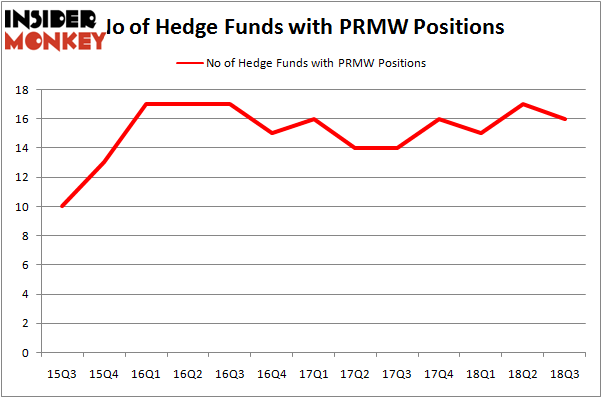 More specifically, Akre Capital Management was the largest shareholder of Primo Water Corporation (NASDAQ:PRMW), with a stake worth $51.3 million reported as of the end of September. Trailing Akre Capital Management was Legion Partners Asset Management, which amassed a stake valued at $37.8 million. Renaissance Technologies, Manatuck Hill Partners, and Driehaus Capital were also very fond of the stock, giving the stock large weights in their portfolios.

Due to the fact that Primo Water Corporation (NASDAQ:PRMW) has witnessed bearish sentiment from the smart money, it’s easy to see that there lies a certain “tier” of funds who were dropping their entire stakes in the third quarter. At the top of the heap, Israel Englander’s Millennium Management sold off the biggest stake of the “upper crust” of funds followed by Insider Monkey, totaling close to $3 million in stock. Bradley LouisáRadoff’s fund, Fondren Management, also said goodbye to its stock, about $0.9 million worth. These transactions are important to note, as total hedge fund interest dropped by 1 funds in the third quarter.

As you can see these stocks had an average of 7.75 hedge funds with bullish positions and the average amount invested in these stocks was $22 million. That figure was $176 million in PRMW’s case. Quantenna Communications, Inc. (NASDAQ:QTNA) is the most popular stock in this table. On the other hand Templeton Dragon Fund, Inc. (NYSE:TDF) is the least popular one with only 1 bullish hedge fund positions. Primo Water Corporation (NASDAQ:PRMW) is not the most popular stock in this group but hedge fund interest is still above average. This is a slightly positive signal but we’d rather spend our time researching stocks that hedge funds are piling on. In this regard QTNA might be a better candidate to consider a long position.

Hedge Funds Are Dumping Interface, Inc. (TILE)
Monthly Newsletter Strategy
Download a free copy of our newsletter and see the details inside!
Hedge Fund Resource Center
Related News
Is Primo Water Corporation (PRMW) Worthy of Your Portfolio? Here’s Why These Five Stocks Are In Spotlight Today Primo Water Corporation (PRMW): Are Hedge Funds Right About This Stock? Many of This Fundamentals-Focused Fund’s Top Picks Are Hitting Home Runs This is No Sodastream International Ltd (SODA) Killer 10 Easiest Winter Olympic Sports to Qualify for 11 Countries With The Worst Modern Music In The World The Top 5 Robo Advisor Apps of 2018
Billionaire Hedge Funds