Is PolyOne Corporation (POL) A Good Stock To Buy?

PolyOne Corporation (NYSE:POL) shares haven’t seen a lot of action during the third quarter. Overall, hedge fund sentiment was unchanged. The stock was in 15 hedge funds’ portfolios at the end of September. At the end of this article we will also compare POL to other stocks including CNO Financial Group Inc (NYSE:CNO), Crescent Point Energy Corp (NYSE:CPG), and CVR Energy, Inc. (NYSE:CVI) to get a better sense of its popularity. 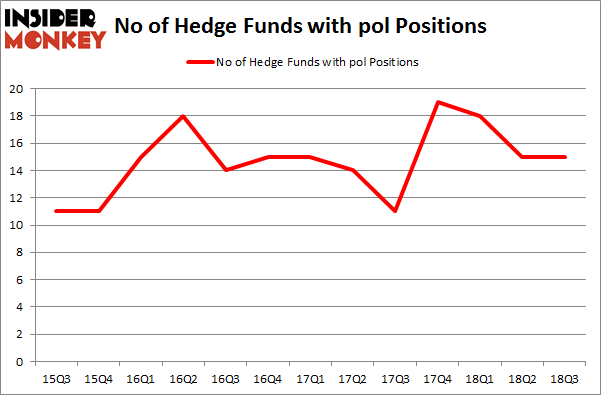 Among these funds, AQR Capital Management held the most valuable stake in PolyOne Corporation (NYSE:POL), which was worth $28.8 million at the end of the third quarter. On the second spot was Millennium Management which amassed $9.5 million worth of shares. Moreover, Citadel Investment Group, Gotham Asset Management, and Renaissance Technologies were also bullish on PolyOne Corporation (NYSE:POL), allocating a large percentage of their portfolios to this stock.

Since PolyOne Corporation (NYSE:POL) has experienced declining sentiment from the aggregate hedge fund industry, logic holds that there were a few funds that elected to cut their entire stakes heading into Q3. Interestingly, Benjamin A. Smith’s Laurion Capital Management cut the largest investment of the “upper crust” of funds watched by Insider Monkey, valued at about $0.7 million in stock, and Alec Litowitz and Ross Laser’s Magnetar Capital was right behind this move, as the fund said goodbye to about $0.3 million worth. These bearish behaviors are interesting, as aggregate hedge fund interest stayed the same (this is a bearish signal in our experience).

As you can see these stocks had an average of 17.5 hedge funds with bullish positions and the average amount invested in these stocks was $872 million. That figure was $59 million in POL’s case. Performance Food Group Company (NYSE:PFGC) is the most popular stock in this table. On the other hand Crescent Point Energy Corp (NYSE:CPG) is the least popular one with only 12 bullish hedge fund positions. PolyOne Corporation (NYSE:POL) is not the least popular stock in this group but hedge fund interest is still below average. This is a slightly negative signal and we’d rather spend our time researching stocks that hedge funds are piling on. In this regard PFGC might be a better candidate to consider a long position.