Platinum Eagle Acquisition Corp. Units (NASDAQ:EAGLU) has experienced an increase in hedge fund interest of late. Our calculations also showed that EAGLU isn’t among the 30 most popular stocks among hedge funds.

In the financial world there are several gauges shareholders can use to evaluate stocks. Some of the most under-the-radar gauges are hedge fund and insider trading activity. Our experts have shown that, historically, those who follow the top picks of the best money managers can outclass the S&P 500 by a healthy margin (see the details here).

What have hedge funds been doing with Platinum Eagle Acquisition Corp. Units (NASDAQ:EAGLU)?

Heading into the fourth quarter of 2018, a total of 18 of the hedge funds tracked by Insider Monkey held long positions in this stock, a change of 6% from the second quarter of 2018. Below, you can check out the change in hedge fund sentiment towards EAGLU over the last 13 quarters. With hedgies’ capital changing hands, there exists a select group of key hedge fund managers who were increasing their holdings considerably (or already accumulated large positions). 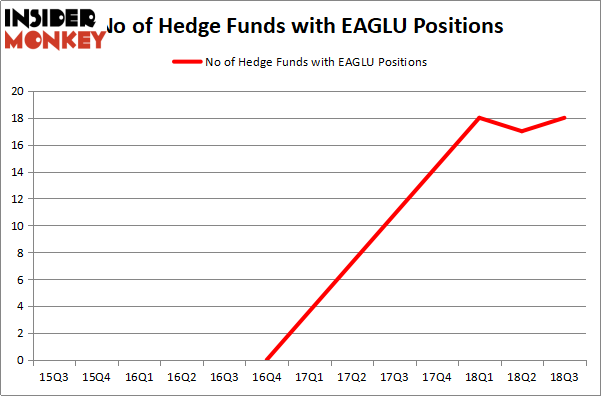 The largest stake in Platinum Eagle Acquisition Corp. Units (NASDAQ:EAGLU) was held by Governors Lane, which reported holding $19.7 million worth of stock at the end of September. It was followed by Canyon Capital Advisors with a $15.6 million position. Other investors bullish on the company included Arrowgrass Capital Partners, Highbridge Capital Management, and Moore Global Investments.

As aggregate interest increased, some big names have been driving this bullishness. Governors Lane, managed by Isaac Corre, created the biggest position in Platinum Eagle Acquisition Corp. Units (NASDAQ:EAGLU). Governors Lane had $19.7 million invested in the company at the end of the quarter. Glenn Russell Dubin’s Highbridge Capital Management also made a $14.8 million investment in the stock during the quarter. The following funds were also among the new EAGLU investors: Andrew Weiss’s Weiss Asset Management, Isaac Corre’s Governors Lane, and Glenn Russell Dubin’s Highbridge Capital Management.

As you can see these stocks had an average of 5.75 hedge funds with bullish positions and the average amount invested in these stocks was $45 million. That figure was $142 million in EAGLU’s case. Oxford Immunotec Global PLC (NASDAQ:OXFD) is the most popular stock in this table. On the other hand JinkoSolar Holding Co., Ltd. (NYSE:JKS) is the least popular one with only 2 bullish hedge fund positions. Compared to these stocks Platinum Eagle Acquisition Corp. Units (NASDAQ:EAGLU) is more popular among hedge funds. Considering that hedge funds are fond of this stock in relation to its market cap peers, it may be a good idea to analyze it in detail and potentially include it in your portfolio.

Should You Buy Genomic Health, Inc. (GHDX)?
Monthly Newsletter Strategy
Download a free copy of our newsletter and see the details inside!
Hedge Fund Resource Center
Related News
11 Countries With The Worst Modern Music In The World The Top 5 Robo Advisor Apps of 2018 Five Reasons You Need a Day-Trading Mentor
Billionaire Hedge Funds