Planet Fitness Inc (NYSE:PLNT) shareholders have witnessed an increase in activity from the world’s largest hedge funds recently. Our calculations also showed that PLNT isn’t among the 30 most popular stocks among hedge funds.

What have hedge funds been doing with Planet Fitness Inc (NYSE:PLNT)?

Heading into the fourth quarter of 2018, a total of 32 of the hedge funds tracked by Insider Monkey were bullish on this stock, a change of 33% from the previous quarter. By comparison, 23 hedge funds held shares or bullish call options in PLNT heading into this year. With hedge funds’ capital changing hands, there exists a select group of key hedge fund managers who were adding to their holdings considerably (or already accumulated large positions). 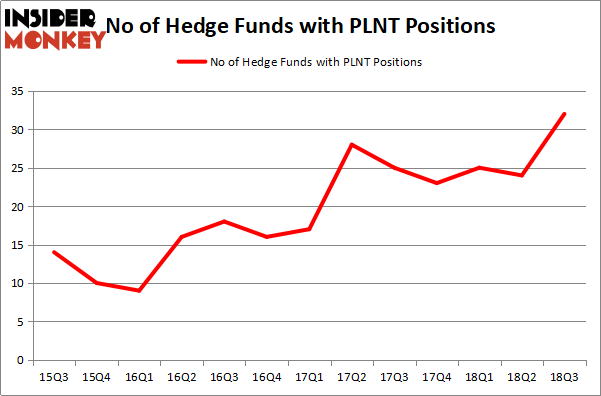 The largest stake in Planet Fitness Inc (NYSE:PLNT) was held by Scopus Asset Management, which reported holding $60 million worth of stock at the end of September. It was followed by Marshall Wace LLP with a $55.2 million position. Other investors bullish on the company included Renaissance Technologies, Daruma Asset Management, and Melvin Capital Management.

As aggregate interest increased, some big names were breaking ground themselves. Marshall Wace LLP, managed by Paul Marshall and Ian Wace, assembled the biggest position in Planet Fitness Inc (NYSE:PLNT). Marshall Wace LLP had $55.2 million invested in the company at the end of the quarter. Gabriel Plotkin’s Melvin Capital Management also made a $39.2 million investment in the stock during the quarter. The other funds with new positions in the stock are Lee Ainslie’s Maverick Capital, David Costen Haley’s HBK Investments, and Principal Global Investors’s Columbus Circle Investors.

As you can see these stocks had an average of 21.25 hedge funds with bullish positions and the average amount invested in these stocks was $472 million. That figure was $506 million in PLNT’s case. Syneos Health, Inc. (NASDAQ:SYNH) is the most popular stock in this table. On the other hand Monolithic Power Systems, Inc. (NASDAQ:MPWR) is the least popular one with only 18 bullish hedge fund positions. Compared to these stocks Planet Fitness Inc (NYSE:PLNT) is more popular among hedge funds. Considering that hedge funds are fond of this stock in relation to its market cap peers, it may be a good idea to analyze it in detail and potentially include it in your portfolio.