Is Perspecta Inc. (PRSP) A Good Stock To Buy?

Perspecta Inc. (NYSE:PRSP) was in 42 hedge funds’ portfolios at the end of the third quarter of 2018. PRSP shareholders have witnessed a decrease in enthusiasm from smart money of late. There were 50 hedge funds in our database with PRSP holdings at the end of the previous quarter. Our calculations also showed that PRSP isn’t among the 30 most popular stocks among hedge funds.

To the average investor there are tons of metrics investors use to size up stocks. A couple of the less utilized metrics are hedge fund and insider trading sentiment. Our researchers have shown that, historically, those who follow the best picks of the top fund managers can trounce their index-focused peers by a healthy margin (see the details here). 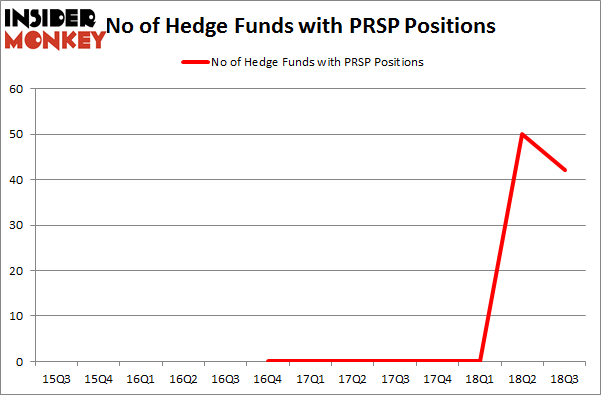 More specifically, Maverick Capital was the largest shareholder of Perspecta Inc. (NYSE:PRSP), with a stake worth $162.2 million reported as of the end of September. Trailing Maverick Capital was Dorsal Capital Management, which amassed a stake valued at $71.4 million. York Capital Management, Bodenholm Capital, and GLG Partners were also very fond of the stock, giving the stock large weights in their portfolios.

Judging by the fact that Perspecta Inc. (NYSE:PRSP) has experienced falling interest from the entirety of the hedge funds we track, logic holds that there is a sect of hedge funds that slashed their entire stakes in the third quarter. It’s worth mentioning that David Gallo’s Valinor Management LLC cut the biggest stake of the 700 funds tracked by Insider Monkey, valued at an estimated $14.1 million in stock. John Orrico’s fund, Water Island Capital, also dropped its stock, about $11.7 million worth. These transactions are interesting, as total hedge fund interest dropped by 8 funds in the third quarter.

As you can see these stocks had an average of 19 hedge funds with bullish positions and the average amount invested in these stocks was $578 million. That figure was $731 million in PRSP’s case. Range Resources Corp. (NYSE:RRC) is the most popular stock in this table. On the other hand Turkcell Iletisim Hizmetleri A.S. (NYSE:TKC) is the least popular one with only 8 bullish hedge fund positions. Compared to these stocks Perspecta Inc. (NYSE:PRSP) is more popular among hedge funds. Considering that hedge funds are fond of this stock in relation to its market cap peers, it may be a good idea to analyze it in detail and potentially include it in your portfolio.