Insider Monkey finished processing more than 700 13F filings made by hedge funds and prominent investors. These filings show these funds’ portfolio positions as of September 30th. What do these smart investors think about Permian Basin Royalty Trust (NYSE:PBT)?

Is Permian Basin Royalty Trust (NYSE:PBT) a bargain? The best stock pickers are in a pessimistic mood. The number of long hedge fund positions were cut by 1 in recent months. Our calculations also showed that PBT isn’t among the 30 most popular stocks among hedge funds. PBT was in 6 hedge funds’ portfolios at the end of September. There were 7 hedge funds in our database with PBT positions at the end of the previous quarter.

In the 21st century investor’s toolkit there are a lot of tools stock traders employ to grade publicly traded companies. Some of the most under-the-radar tools are hedge fund and insider trading moves. We have shown that, historically, those who follow the best picks of the top hedge fund managers can outpace the S&P 500 by a solid amount (see the details here).

What have hedge funds been doing with Permian Basin Royalty Trust (NYSE:PBT)? 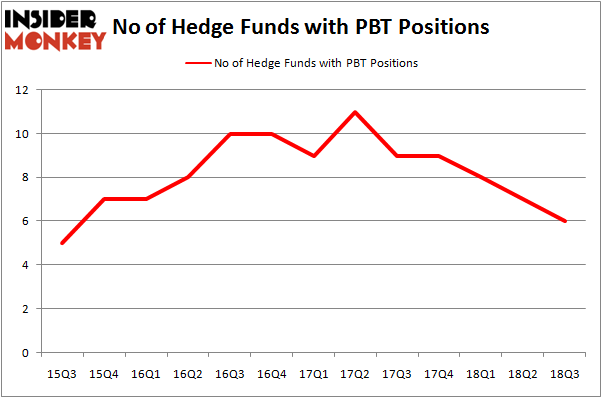 More specifically, Royce & Associates was the largest shareholder of Permian Basin Royalty Trust (NYSE:PBT), with a stake worth $7.2 million reported as of the end of September. Trailing Royce & Associates was Horizon Asset Management, which amassed a stake valued at $3.9 million. Arrowstreet Capital, Renaissance Technologies, and Two Sigma Advisors were also very fond of the stock, giving the stock large weights in their portfolios.

We view hedge fund activity in the stock unfavorable, but in this case there was only a single hedge fund selling its entire position: Millennium Management. One hedge fund selling its entire position doesn’t always imply a bearish intent. Theoretically a hedge fund may decide to sell a promising position in order to invest the proceeds in a more promising idea. However, we don’t think this is the case in this case because none of the 700+ hedge funds tracked by Insider Monkey identified PBT as a viable investment and initiated a position in the stock.

As you can see these stocks had an average of 6.25 hedge funds with bullish positions and the average amount invested in these stocks was $28 million. That figure was $15 million in PBT’s case. MeiraGTx Holdings plc (NASDAQ:MGTX) is the most popular stock in this table. On the other hand Guggenheim Taxable Municipal Managed Duration Trst (NYSE:GBAB) is the least popular one with only 1 bullish hedge fund positions. Permian Basin Royalty Trust (NYSE:PBT) is not the least popular stock in this group but hedge fund interest is still below average. This is a slightly negative signal and we’d rather spend our time researching stocks that hedge funds are piling on. In this regard MGTX might be a better candidate to consider a long position.