Is Perficient, Inc. (PRFT) A Good Stock to Buy?

The Insider Monkey team has completed processing the quarterly 13F filings for the September quarter submitted by the hedge funds and other money managers included in our extensive database. Most hedge funds have been producing disappointing net returns in recent years, however that was partly due to the poor performance of small-cap stocks in general. Well, small-cap stocks finally turned the corner and have been beating the large-cap stocks by more than 10 percentage points over the last 5 months.This means the relevancy of hedge funds’ public filings became inarguable, as they may reveal numerous high-potential stocks. The following article will discuss the smart money sentiment towards Perficient, Inc. (NASDAQ:PRFT).

Is Perficient, Inc. (NASDAQ:PRFT) a buy, sell, or hold? The best stock pickers are altogether getting less optimistic. The number of long hedge fund bets that are revealed through 13F filings dropped by 1 in recent months. PRFT was in 9 hedge funds’ portfolios at the end of September. There were 10 hedge funds in our database with PRFT holdings at the end of the previous quarter. The level and the change in hedge fund popularity aren’t the only variables you need to analyze to decipher hedge funds’ perspectives. A stock may witness a boost in popularity but it may still be less popular than similarly priced stocks. That’s why at the end of this article we will examine companies such as Investors Real Estate Trust (NYSE:IRET), Leju Holdings Ltd (ADR) (NYSE:LEJU), and Vanda Pharmaceuticals Inc. (NASDAQ:VNDA) to gather more data points.

What have hedge funds been doing with Perficient, Inc. (NASDAQ:PRFT)?

Heading into the fourth quarter of 2016, a total of 9 of the hedge funds tracked by Insider Monkey were long this stock, a 10% decline from one quarter earlier. Below, you can check out the change in hedge fund sentiment towards PRFT over the last 5 quarters, which has fallen slightly since peaking at the end of Q1. With the smart money’s capital changing hands, there exists a select group of notable hedge fund managers who were upping their stakes meaningfully (or already accumulated large positions). 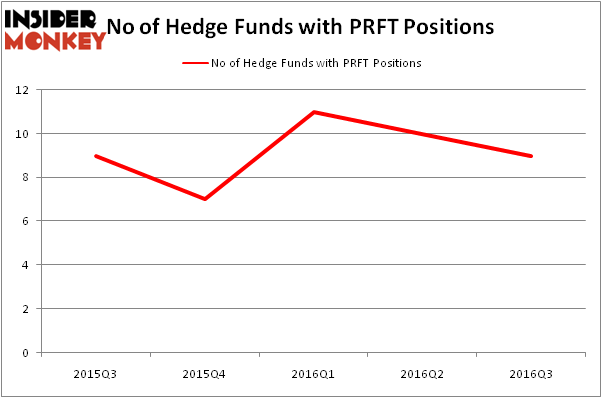 When looking at the institutional investors followed by Insider Monkey, D E Shaw, one of the biggest hedge funds in the world has the most valuable position in Perficient, Inc. (NASDAQ:PRFT), worth close to $2.1 million. The second most bullish fund manager is Citadel Investment Group, led by Ken Griffin, which holds a $1.4 million position. Remaining hedge funds and institutional investors with similar optimism contain Chuck Royce’s Royce & Associates, Cliff Asness’ AQR Capital Management, and John Overdeck and David Siegel’s Two Sigma Advisors. We should note that none of these hedge funds are among our list of the 100 best performing hedge funds which is based on the performance of their 13F long positions in non-micro-cap stocks.

Here is What Hedge Funds Think About Alliant Energy Corporation (LNT)
Monthly Newsletter Strategy
Download a free copy of our newsletter and see the details inside!
Hedge Fund Resource Center
Related News
Is Perficient, Inc. (PRFT) A Good Stock To Buy? Two Small-Cap Services Stocks That Insiders Love Servicesource International Inc (SREV): Are Hedge Funds Right About This Stock? Should You Avoid Tangoe Inc (TNGO)? Tangoe Inc (TNGO): Hedge Funds Are Bullish and Insiders Are Bearish, What Should You Do? Hedge Funds Are Selling Perficient, Inc. (PRFT) 11 Best Science YouTube Channels To Watch 10 Most Famous Cubist Paintings 5 Countries That Have the Most Drones
Billionaire Hedge Funds