Is Pearson a good investment right now? Pearson PLC (NYSE:PSO) is one of the largest educational and consumer publishing companies on the markets today, producing textbooks used in classrooms around the globe, and overseeing the Financial Times publication. In addition to these ventures, Pearson has also recently established a for-profit college in the UK, called Pearson College, that will offer authentic degrees via Royal Holloway, a constituent of the University of London. As the company’s e-slogan claims – “Study Business in a FTSE 100 Company” – Pearson College will give upper-level students the option to partake in an internship at industry-leading organizations like the Peter Jones Foundation, Atos, Cisco, Sony Pictures Entertainment, and regional telecom provider BT.

While we can still guesstimate exactly how profitable Pearson College will be, another more recent development may be herding the bulls into this stock, so to speak. As we discussed here on Insider Monkey last week, Pearson and Bertelsmann A.G. agreed to “combine their book-publishing operations, Random House and Penguin respectively, in a joint venture, to be called Penguin Random House.”

As expected, there is a lot of excitement surrounding this deal, as the Wall Street Journal estimates that Pearson and Bertelsmann will now control “roughly a quarter of global English-language consumer book sales,” adding that the companies will be able to engage in substantial cost sharing, while expanding their footprint in the e-book realm. Moreover, Pearson and Bertelsmann will see added benefits in the digital marketplace as a result their settlement with Google Inc (NASDAQ:GOOG), which according to the New York Times, will “allow publishers to choose whether Google digitizes their books and journals,” adding that “under the settlement, publishers get the benefit of Google digitizing out-of-print books that they might not otherwise have turned into e-books.”

From an investor’s point of view, the markets haven’t been overly excited, but still positive, as shares of Pearson PLC have returned a shave under one percentage point since the joint venture was announced. Since the start of the year, the stock has been a decent investment, returning 6.6%. This is, however, below the publish industry’s year-to-date average (15.8%), and peers like The McGraw-Hill Companies, Inc. (NYSE:MHP), Reed Elsevier NV (NYSE:ENL), Scholastic Corp (NASDAQ:SCHL), and diversified media competitor News Corp (NASDAQ:NWSA). Here’s a graphical look at how investors have fared in Pearson, and the rest of its publishing brethren in 2012. 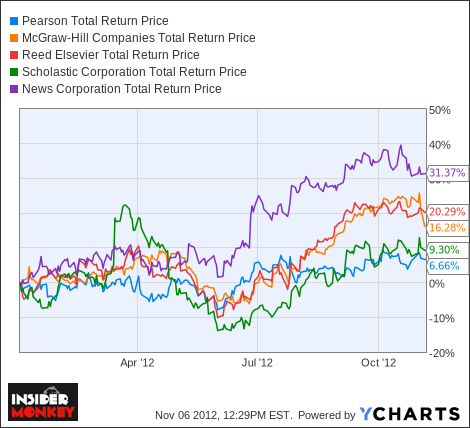 As can be probably expected, shares of Pearson are trading at rather attractive valuation metrics at the moment. From an earnings standpoint, even though the company has seen its bottom line grow at an astounding rate of 48.3% a year post-recession, it still trades at a discount of more than 35% below the industry average. Specifically, Pearson sports a P/E of 10.4X, while the publishing industry’s norm is a shave above 16.0X, and competitors like McGraw-Hill (18.9X), Reed Elsevier (13.9X), Scholastic Corp (10.5X), and News Corp (54.36X) are all more expensive.

This undervaluation comes shortly after the Motley Fool originally reported that Pearson expects to finish 2012 with earnings of 84.9 pence per share, roughly an EPS of $1.35-$1.36 by today’s GBP to USD conversion rate. If this guidance holds, the Fool says that it “would be broadly in line with the consensus of current market expectations,” with growth supported by publishing sales and surprisingly, the Financial Times. Over the longer term, sell-side analysts are expecting Pearson to expand its EPS at a modest rate of 6.5% a year over the next half-decade, which is above what is expected of Reed Elsevier (6.2%), but below McGraw-Hill (12.7%), Scholastic Corp (9.1%), and News Corp (15.9%).

Intriguingly, it looks like investors are slightly undervaluing Pearson’s growth prospects, which can be seen by using the PEG ratio. Normalized for growth, the company’s stock currently sports a PEG of 1.62, which is below Reed Elsevier (2.23) and News Corp (3.41) quite handily. Mc-Graw Hill (1.49) trades much more in line with Pearson, and only Scholastic Corp (1.15) looks to be substantially cheaper at the moment.

In the hedge fund industry, Pearson’s two biggest bulls are Louis Navellier and Jim Simons, with the latter owning 25,800 shares to Navellier’s 11,319. Here’s a longer look at Simons’s 13F portfolio, and here’s Navellier’s 13F. While these money managers’ interest in this stock isn’t world-beating, it is still worth taking account of. Fresh off a major merger, Pearson looks to be a decent value-play at the moment, with an earnings valuation below most of those in its industry, and an ace in the hole with regard to its higher education prospects. The company’s expected EPS growth isn’t going to turn any heads, but we still have yet to view all of the details regarding its deal with Bertelsmann A.G. As long as the anti-trust regulators stay away, there can be moderate upside to be had from today’s price levels.