Is Paychex, Inc. (PAYX) A Good Stock To Buy?

Is Paychex, Inc. (NASDAQ:PAYX) a buy right now? The smart money is becoming hopeful. The number of long hedge fund bets increased by 6 lately. Our calculations also showed that PAYX isn’t among the 30 most popular stocks among hedge funds.

How have hedgies been trading Paychex, Inc. (NASDAQ:PAYX)? 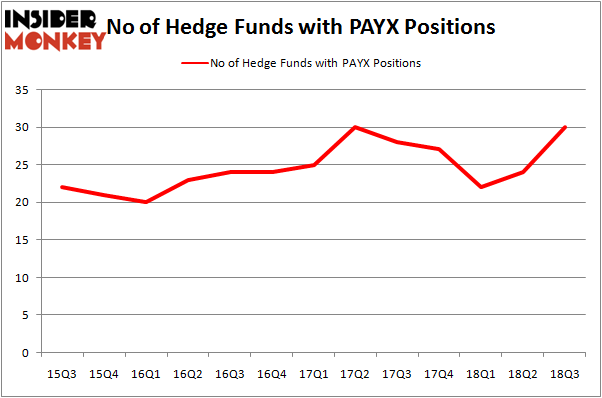 The largest stake in Paychex, Inc. (NASDAQ:PAYX) was held by Select Equity Group, which reported holding $510.3 million worth of stock at the end of September. It was followed by Arrowstreet Capital with a $251.7 million position. Other investors bullish on the company included Millennium Management, GLG Partners, and Gotham Asset Management.

Let’s check out hedge fund activity in other stocks – not necessarily in the same industry as Paychex, Inc. (NASDAQ:PAYX) but similarly valued. We will take a look at PPG Industries, Inc. (NYSE:PPG), DXC Technology Company (NYSE:DXC), IQVIA Holdings, Inc. (NYSE:IQV), and Discover Financial Services (NYSE:DFS). All of these stocks’ market caps are similar to PAYX’s market cap.

As you can see these stocks had an average of 38 hedge funds with bullish positions and the average amount invested in these stocks was $2.28 billion. That figure was $1.08 billion in PAYX’s case. DXC Technology Company (NYSE:DXC) is the most popular stock in this table. On the other hand PPG Industries, Inc. (NYSE:PPG) is the least popular one with only 22 bullish hedge fund positions. Paychex, Inc. (NASDAQ:PAYX) is not the least popular stock in this group but hedge fund interest is still below average. This is a slightly negative signal and we’d rather spend our time researching stocks that hedge funds are piling on. In this regard DXC might be a better candidate to consider a long position.