Is Park Sterling Corp (PSTB) A Good Stock To Buy?

In this article, we’ll discuss the latest hedge fund activity surrounding Park Sterling Corp (NASDAQ:PSTB). The company registered a slight decline in popularity among investors in our database during the third quarter, as there were 13 funds long the stock at the end of September, versus 14 funds at the end of June. The level and the change in hedge fund popularity aren’t the only variables you need to analyze to decipher hedge funds’ perspectives. A stock may witness a boost in popularity but it may still be less popular than similarly priced stocks. That’s why at the end of this article we will examine companies such as Brightcove Inc (NASDAQ:BCOV), Zoe’s Kitchen Inc (NYSE:ZOES), and World Acceptance Corp. (NASDAQ:WRLD) to gather more data points.

With all of this in mind, let’s take a gander at the fresh action regarding Park Sterling Corp (NASDAQ:PSTB).

How have hedgies been trading Park Sterling Corp (NASDAQ:PSTB)?

At the end of September, a total of 13 of the hedge funds tracked by Insider Monkey held long positions in Park Sterling Corp (NASDAQ:PSTB), representing a decline of 7% from the previous quarter. The graph below displays the number of hedge funds with bullish position in PSTB over the last five quarters. So, let’s check out which hedge funds were among the top holders of the stock and which hedge funds were making big moves. 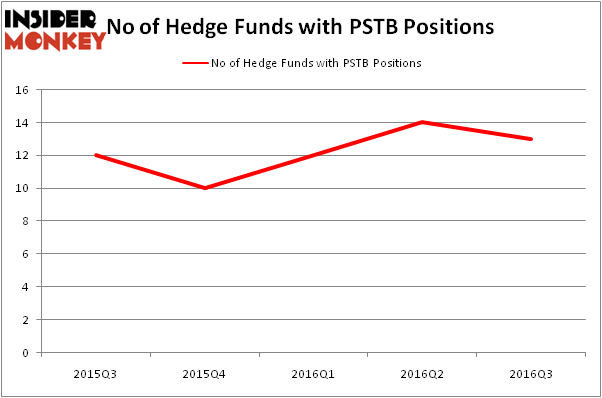 According to Insider Monkey’s hedge fund database, Joe Huber’s Huber Capital Management has the number one position in Park Sterling Corp (NASDAQ:PSTB), worth close to $20.1 million, amounting to 0.8% of its total 13F portfolio. The second largest stake is held by Royce & Associates, led by Chuck Royce, which holds a $5.6 million position; the fund has less than 0.1%% of its 13F portfolio invested in the stock. Some other peers that hold long positions contain Renaissance Technologies (one of the top hedge funds in the world), Paul Hondros’ AlphaOne Capital Partners and Mark Lee’s Forest Hill Capital. We should note that none of these hedge funds are among our list of the 100 best performing hedge funds which is based on the performance of their 13F long positions in non-microcap stocks.