Is Packaging Corporation Of America (PKG) A Good Stock To Buy?

Hedge Funds and other institutional investors have just completed filing their 13Fs with the Securities and Exchange Commission, revealing their equity portfolios as of the end of September. At Insider Monkey, we follow over 700 of the best-performing investors and by analyzing their 13F filings, we can determine the stocks that they are collectively bullish on. One of their picks is Packaging Corporation Of America (NYSE:PKG), so let’s take a closer look at the sentiment that surrounds it in the current quarter.

Packaging Corporation Of America (NYSE:PKG) shares haven’t seen a lot of action during the third quarter. Overall, hedge fund sentiment was unchanged. The stock was in 26 hedge funds’ portfolios at the end of September. At the end of this article we will also compare PKG to other stocks including Melco Resorts & Entertainment Limited (NASDAQ:MLCO), Snap-on Incorporated (NYSE:SNA), and Grupo Televisa SAB (NYSE:TV) to get a better sense of its popularity.

Let’s take a glance at the key hedge fund action regarding Packaging Corporation Of America (NYSE:PKG).

What does the smart money think about Packaging Corporation Of America (NYSE:PKG)?

Heading into the fourth quarter of 2018, a total of 26 of the hedge funds tracked by Insider Monkey held long positions in this stock, no change from the second quarter of 2018. By comparison, 25 hedge funds held shares or bullish call options in PKG heading into this year. With hedge funds’ capital changing hands, there exists an “upper tier” of noteworthy hedge fund managers who were adding to their holdings significantly (or already accumulated large positions). 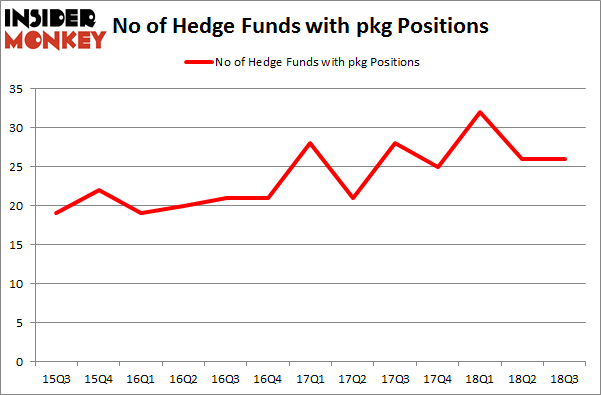 According to Insider Monkey’s hedge fund database, David Cohen and Harold Levy’s Iridian Asset Management has the largest position in Packaging Corporation Of America (NYSE:PKG), worth close to $123.3 million, corresponding to 1.2% of its total 13F portfolio. The second largest stake is held by Ken Griffin of Citadel Investment Group, with a $67 million position; less than 0.1%% of its 13F portfolio is allocated to the company. Some other members of the smart money that hold long positions comprise Cliff Asness’s AQR Capital Management, Martin D. Sass’s MD Sass and Andrew Feldstein and Stephen Siderow’s Blue Mountain Capital.

Judging by the fact that Packaging Corporation Of America (NYSE:PKG) has faced falling interest from the smart money, it’s safe to say that there is a sect of fund managers that slashed their entire stakes in the third quarter. Intriguingly, Robert Joseph Caruso’s Select Equity Group cut the biggest stake of the 700 funds followed by Insider Monkey, comprising close to $19.4 million in stock. Steve Cohen’s fund, Point72 Asset Management, also cut its stock, about $13.9 million worth. These bearish behaviors are interesting, as aggregate hedge fund interest stayed the same (this is a bearish signal in our experience).

As you can see these stocks had an average of 23.25 hedge funds with bullish positions and the average amount invested in these stocks was $714 million. That figure was $315 million in PKG’s case. Melco Resorts & Entertainment Limited (NASDAQ:MLCO) is the most popular stock in this table. On the other hand Grupo Televisa SAB (NYSE:TV) is the least popular one with only 19 bullish hedge fund positions. Packaging Corporation Of America (NYSE:PKG) is not the most popular stock in this group but hedge fund interest is still above average. This is a slightly positive signal but we’d rather spend our time researching stocks that hedge funds are piling on. In this regard MLCO might be a better candidate to consider a long position.

Hedge Funds Are Betting On Glu Mobile Inc. (GLUU)
Monthly Newsletter Strategy
Download a free copy of our newsletter and see the details inside!
Hedge Fund Resource Center
Related News
Is Packaging Corp Of America (PKG) A Good Stock To Buy? Two Packaging and Container Companies Highlight Fresh Insider Selling; Plus Noteworthy Insider Purchases Why Intel, Apple, and 3 Other Stocks Are All The Rage Among Investors This Morning Is Packaging Corp Of America (PKG) A Good Stock To Buy? Bank of New York Mellon Corp (BK): Marcato Capital Management Asks for New CEO; Two Other Stocks Mick McGuire is Bullish On Genworth Financial Inc (GNW), Bunge Ltd (BG): Do You Own These Potential Buffett Targets? What Hedge Funds Think About AptarGroup, Inc. (ATR) Five Reasons You Need a Day-Trading Mentor 15 Most Important Medical Discoveries of 2018 The 10 Best Islands to Visit in 2019
Billionaire Hedge Funds