Is ONE Gas Inc (OGS) A Good Stock To Buy?

Insider Monkey has processed numerous 13F filings of hedge funds and famous investors to create an extensive database of hedge fund holdings. The 13F filings show the hedge funds and investors’ positions as of the end of the third quarter. You can find write-ups about an individual hedge fund’s trades on numerous financial news websites. However, in this article we will take a look at their collective moves and analyze what the smart money thinks of ONE Gas Inc (NYSE:OGS) based on that data.

Is ONE Gas Inc (NYSE:OGS) a healthy stock for your portfolio? The best stock pickers are becoming more confident. The number of bullish hedge fund positions improved by 1 in recent months. Our calculations also showed that ogs isn’t among the 30 most popular stocks among hedge funds. OGS was in 15 hedge funds’ portfolios at the end of the third quarter of 2018. There were 14 hedge funds in our database with OGS holdings at the end of the previous quarter.

How are hedge funds trading ONE Gas Inc (NYSE:OGS)?

At Q3’s end, a total of 15 of the hedge funds tracked by Insider Monkey held long positions in this stock, a change of 7% from one quarter earlier. Below, you can check out the change in hedge fund sentiment towards OGS over the last 13 quarters. With hedgies’ positions undergoing their usual ebb and flow, there exists a few noteworthy hedge fund managers who were increasing their stakes substantially (or already accumulated large positions). 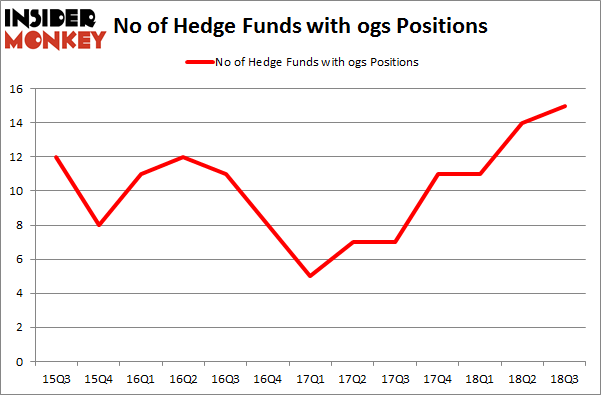 Among these funds, Impax Asset Management held the most valuable stake in ONE Gas Inc (NYSE:OGS), which was worth $20.9 million at the end of the third quarter. On the second spot was AQR Capital Management which amassed $17.6 million worth of shares. Moreover, Renaissance Technologies, Arrowstreet Capital, and GLG Partners were also bullish on ONE Gas Inc (NYSE:OGS), allocating a large percentage of their portfolios to this stock.

As one would reasonably expect, some big names were leading the bulls’ herd. Impax Asset Management, managed by Ian Simm, initiated the largest position in ONE Gas Inc (NYSE:OGS). Impax Asset Management had $20.9 million invested in the company at the end of the quarter. Paul Marshall and Ian Wace’s Marshall Wace LLP also initiated a $3.3 million position during the quarter. The other funds with new positions in the stock are Ken Griffin’s Citadel Investment Group, John Overdeck and David Siegel’s Two Sigma Advisors, and Matthew Tewksbury’s Stevens Capital Management.

As you can see these stocks had an average of 16 hedge funds with bullish positions and the average amount invested in these stocks was $286 million. That figure was $89 million in OGS’s case. Wyndham Destinations, Inc. (NYSE:WYND) is the most popular stock in this table. On the other hand Hutchison China MediTech Limited (NASDAQ:HCM) is the least popular one with only 9 bullish hedge fund positions. ONE Gas Inc (NYSE:OGS) is not the least popular stock in this group but hedge fund interest is still below average. This is a slightly negative signal and we’d rather spend our time researching stocks that hedge funds are piling on. In this regard WYND might be a better candidate to consider a long position.