Is Omnicom Group Inc. (NYSE:OMC) the right pick for your portfolio? Investors who are in the know are buying. The number of bullish hedge fund bets inched up by 6 recently, and there were 19 bullish investors in our database at the end of the third quarter. Still, the number of hedge funds with long positions in the company was far from enough for it to count as on of the 30 most popular stocks among hedge funds in Q3 of 2018. Nevertheless, we still think that the company requires more detailed analyses, which is why at the end of this article we will compare it with other companies of similar market caps.

In the 21st century investor’s toolkit there are several indicators market participants can use to evaluate their stock investments. A couple of the most useful indicators are hedge fund and insider trading sentiment. Our experts have shown that, historically, those who follow the top picks of the elite investment managers can outperform the market by a superb amount (see the details here).

While researching to gather more data about Omnicom Group Inc. (NYSE:OMC), we tracked down First Eagle Global Value Team’s Q3 Commentary, in which the stock is mentioned:

“Omnicom Group, a US-based global advertising company, fell as weaker-than-expected US ad growth in the second quarter heightened concerns that the industry is being structurally challenged by the growth of social media, the rise of independent digital agencies and competition from consultants. While Omnicom’s business is certainly challenged by all of these factors, we believe that over the long term, it will remain a key advisor to multinational clients needing help in managing their multi-billion-dollar ad budgets across all advertising media.”

Heading into the fourth quarter of 2018, a total of 19 of the hedge funds tracked by Insider Monkey were long this stock, a change of 46% from one quarter earlier. The graph below displays the number of hedge funds with bullish position in OMC over the last 13 quarters. With hedgies’ positions undergoing their usual ebb and flow, there exists a select group of notable hedge fund managers who were upping their holdings considerably (or already accumulated large positions). 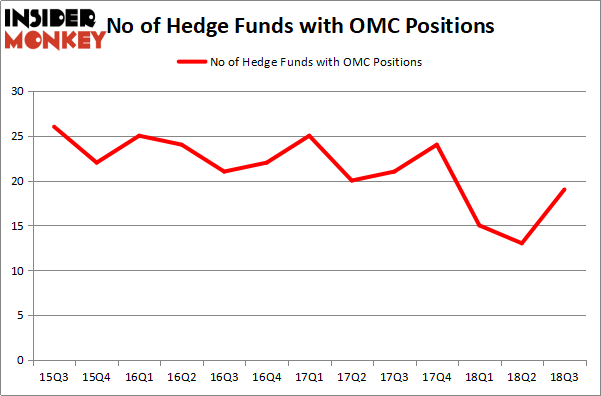 As you can see these stocks had an average of 33 hedge funds with bullish positions and the average amount invested in these stocks was $1.48 billion. That figure was $725 million in OMC’s case. MGM Resorts International (NYSE:MGM) is the most popular stock in this table. On the other hand Ball Corporation (NYSE:BLL) is the least popular one with only 20 bullish hedge fund positions. Compared to these stocks Omnicom Group Inc. (NYSE:OMC) is even less popular than BLL. Considering that hedge funds aren’t fond of this stock in relation to other companies analyzed in this article, it may be a good idea to analyze it in detail and understand why the smart money isn’t behind this stock. This isn’t necessarily bad news. Although it is possible that hedge funds may think the stock is overpriced and view the stock as a short candidate, they may not be very familiar with the bullish thesis. In either case more research is warranted.