Is Ocwen Financial Corp. A Good Stock To Buy?

Is Ocwen Financial Corporation (NYSE:OCN) worth your attention right now? Money managers are becoming hopeful. The number of bullish hedge fund positions inched up by 1 in recent months. Our calculations also showed that OCN isn’t among the 30 most popular stocks among hedge funds.

According to most market participants, hedge funds are viewed as underperforming, outdated investment tools of years past. While there are greater than 8,000 funds with their doors open at present, Our researchers hone in on the top tier of this group, around 700 funds. It is estimated that this group of investors administer most of the smart money’s total capital, and by observing their unrivaled investments, Insider Monkey has revealed numerous investment strategies that have historically exceeded the market. Insider Monkey’s flagship hedge fund strategy surpassed the S&P 500 index by 6 percentage points per year since its inception in May 2014 through early November 2018. We were able to generate large returns even by identifying short candidates. Our portfolio of short stocks lost 24% since February 2017 (through December 3rd) even though the market was up nearly 23% during the same period. We just shared a list of 11 short targets in our latest quarterly update.

While completing our research for this write-up, we came across Laughing Water Capital’s Quarterly Report that gave its opinion on the company, in which it has a position. We bring you a snippet of that letter:

“Ocwen Financial is a mortgage servicing company that can best be summed up as a hated stock in a hated industry, due to a disastrous decade of mismanagement, and intense regulatory scrutiny. However, ten years after the housing crisis threatened to collapse the global economic system and following a ~90+% decline in price, the company has developed a clear path past its past sins, is about to move past the last remnants of its regulatory problems, and has strong tailwinds from a rising interest rate environment. Additionally, I believe we are in the early innings of industry consolidation which will drive revenue and margins for years to come.”

What have hedge funds been doing with Ocwen Financial Corporation (NYSE: OCN)?

Our readers will be interested to know that Leon G. Cooperman, a large shareholder in the company, was responsible for the last big insider purchase of Ocwen stock, snapping up 29,187 shares at $3.54 in early 2018. With the stock trading at $1.72, it was not an investment that he turned a significant profit for teh billionaire investor.

At the end of the third quarter, a total of 17 of the hedge funds tracked by Insider Monkey were bullish on this stock, a change of 6% from one quarter earlier. By comparison, 15 hedge funds held shares or bullish call options in OCN heading into this year. With the smart money’s capital changing hands, there exist a few noteworthy hedge fund managers who were adding to their stakes considerably (or already accumulated large positions). 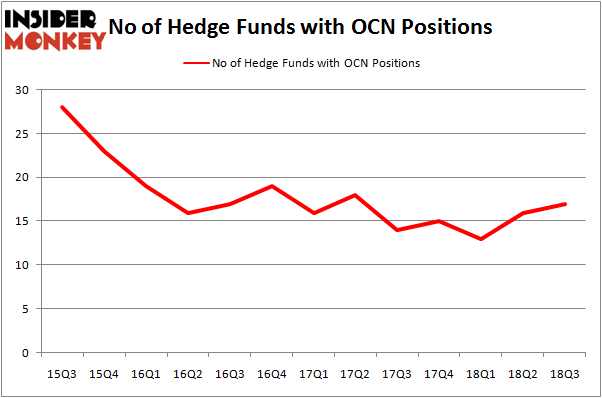 The largest stake in Ocwen Financial Corporation (NYSE:OCN) was held by Omega Advisors, which reported holding $56.8 million worth of stock at the end of September. It was followed by GLG Partners with a $8.1 million position. Other investors bullish on the company included Renaissance Technologies, CQS Cayman LP, and Akanthos Capital.

Now, key money managers were breaking ground themselves. PDT Partners, managed by Peter Muller, assembled the most valuable position in Ocwen Financial Corporation (NYSE:OCN). PDT Partners had $0.3 million invested in the company at the end of the quarter. Matthew Hulsizer’s PEAK6 Capital Management also initiated a $0.2 million position during the quarter. The only other fund with a brand new OCN position is Paul Marshall and Ian Wace’s Marshall Wace LLP.

As you can see these stocks had an average of 9.75 hedge funds with bullish positions and the average amount invested in these stocks was $63 million. That figure was $89 million in OCN’s case. PennyMac Financial Services Inc (NYSE:PFSI) is the most popular stock in this table. On the other hand Sinovac Biotech Ltd. (NASDAQ:SVA) is the least popular one with only 3 bullish hedge fund positions. Compared to these stocks Ocwen Financial Corporation (NYSE:OCN) is more popular among hedge funds. Considering that hedge funds are fond of this stock in relation to its market cap peers, it may be a good idea to analyze it in detail and potentially include it in your portfolio.