At Insider Monkey, we pore over the filings of nearly 750 top investment firms every quarter, a process we have now completed for the latest reporting period. The data we’ve gathered as a result gives us access to a wealth of collective knowledge based on these firms’ portfolio holdings as of March 31. In this article, we will use that wealth of knowledge to determine whether or not Oaktree Capital Group LLC (NYSE:OAK) makes for a good investment right now.

Oaktree Capital Group LLC (NYSE:OAK) has seen an increase in hedge fund interest in recent months. OAK was in 15 hedge funds’ portfolios at the end of the first quarter of 2019. There were 7 hedge funds in our database with OAK positions at the end of the previous quarter. Our calculations also showed that OAK isn’t among the 30 most popular stocks among hedge funds.

In the 21st century investor’s toolkit there are numerous formulas stock traders have at their disposal to analyze their holdings. Some of the most innovative formulas are hedge fund and insider trading interest. Our experts have shown that, historically, those who follow the top picks of the best hedge fund managers can outperform the S&P 500 by a healthy margin (see the details here).

How have hedgies been trading Oaktree Capital Group LLC (NYSE:OAK)?

At the end of the first quarter, a total of 15 of the hedge funds tracked by Insider Monkey were bullish on this stock, a change of 114% from the fourth quarter of 2018. The graph below displays the number of hedge funds with bullish position in OAK over the last 15 quarters. With hedge funds’ capital changing hands, there exists an “upper tier” of noteworthy hedge fund managers who were upping their stakes meaningfully (or already accumulated large positions). 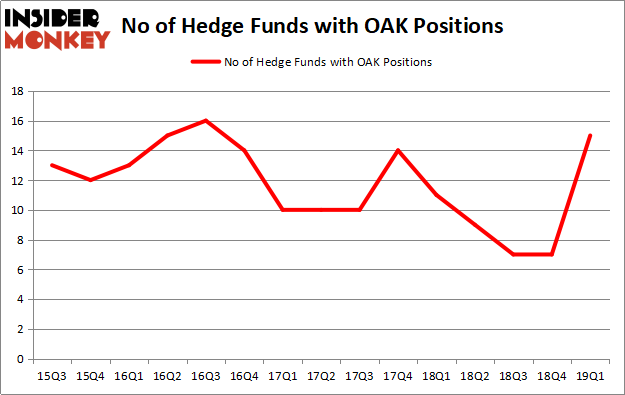 The largest stake in Oaktree Capital Group LLC (NYSE:OAK) was held by Water Island Capital, which reported holding $55.3 million worth of stock at the end of March. It was followed by Markel Gayner Asset Management with a $52.9 million position. Other investors bullish on the company included Ariel Investments, Horizon Asset Management, and Royce & Associates.

As industrywide interest jumped, key hedge funds have been driving this bullishness. Water Island Capital, managed by John Orrico, assembled the most valuable position in Oaktree Capital Group LLC (NYSE:OAK). Water Island Capital had $55.3 million invested in the company at the end of the quarter. Steve Pigott’s Fort Baker Capital Management also made a $8.6 million investment in the stock during the quarter. The other funds with new positions in the stock are John Thiessen’s Vertex One Asset Management, James Dondero’s Highland Capital Management, and Carl Goldsmith and Scott Klein’s Beach Point Capital Management.

As you can see these stocks had an average of 24 hedge funds with bullish positions and the average amount invested in these stocks was $490 million. That figure was $201 million in OAK’s case. Robert Half International Inc. (NYSE:RHI) is the most popular stock in this table. On the other hand ANGI Homeservices Inc. (NASDAQ:ANGI) is the least popular one with only 22 bullish hedge fund positions. Compared to these stocks Oaktree Capital Group LLC (NYSE:OAK) is even less popular than ANGI. Hedge funds dodged a bullet by taking a bearish stance towards OAK. Our calculations showed that the top 20 most popular hedge fund stocks returned 6.2% in Q2 through June 19th and outperformed the S&P 500 ETF (SPY) by nearly 3 percentage points. Unfortunately OAK wasn’t nearly as popular as these 20 stocks (hedge fund sentiment was very bearish); OAK investors were disappointed as the stock returned 2% during the same time frame and underperformed the market. If you are interested in investing in large cap stocks with huge upside potential, you should check out the top 20 most popular stocks among hedge funds as 13 of these stocks already outperformed the market so far in the second quarter.