Is NxStage Medical, Inc. (NXTM) A Good Stock To Buy?

After several tireless days we have finished crunching the numbers from the more than 700 13F filings issued by the elite hedge funds and other investment firms that we track at Insider Monkey, which disclosed those firms’ equity portfolios as of September 30. The results of that effort will be put on display in this article, as we share valuable insight into the smart money sentiment towards NxStage Medical, Inc. (NASDAQ:NXTM).

NxStage Medical, Inc. (NASDAQ:NXTM) shares haven’t seen a lot of action during the third quarter. Overall, hedge fund sentiment was unchanged. The stock was in 32 hedge funds’ portfolios at the end of the third quarter of 2018. At the end of this article we will also compare NXTM to other stocks including WillScot Corporation (NASDAQ:WSC), Mueller Water Products, Inc. (NYSE:MWA), and NOW Inc (NYSE:DNOW) to get a better sense of its popularity.

According to most stock holders, hedge funds are assumed to be unimportant, outdated investment vehicles of yesteryear. While there are more than 8,000 funds with their doors open at the moment, Our researchers hone in on the bigwigs of this group, about 700 funds. These money managers control the lion’s share of the hedge fund industry’s total capital, and by observing their highest performing stock picks, Insider Monkey has formulated several investment strategies that have historically outstripped Mr. Market. Insider Monkey’s flagship hedge fund strategy outrun the S&P 500 index by 6 percentage points a year since its inception in May 2014 through early November 2018. We were able to generate large returns even by identifying short candidates. Our portfolio of short stocks lost 24% since February 2017 (through December 3rd) even though the market was up nearly 23% during the same period. We just shared a list of 11 short targets in our latest quarterly update.

How have hedgies been trading NxStage Medical, Inc. (NASDAQ:NXTM)? 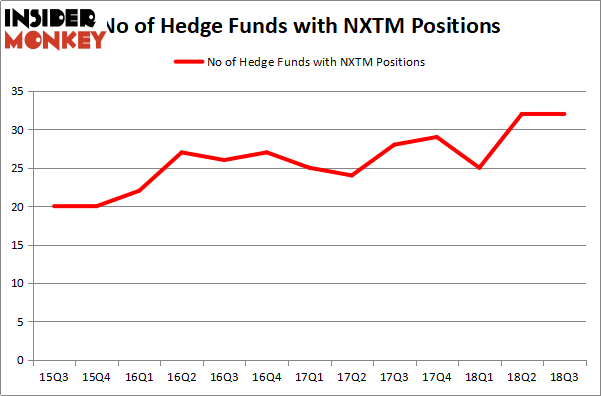 The largest stake in NxStage Medical, Inc. (NASDAQ:NXTM) was held by TIG Advisors, which reported holding $115.4 million worth of stock at the end of September. It was followed by Magnetar Capital with a $88.1 million position. Other investors bullish on the company included Alpine Associates, Millennium Management, and Water Island Capital.

Because NxStage Medical, Inc. (NASDAQ:NXTM) has faced falling interest from the smart money, it’s safe to say that there lies a certain “tier” of hedge funds that slashed their entire stakes by the end of the third quarter. At the top of the heap, Richard Gerson and Navroz D. Udwadia’s Falcon Edge Capital dropped the largest stake of the “upper crust” of funds tracked by Insider Monkey, valued at about $22.1 million in stock. Anand Parekh’s fund, Alyeska Investment Group, also said goodbye to its stock, about $8.6 million worth. These transactions are important to note, as aggregate hedge fund interest stayed the same (this is a bearish signal in our experience).

As you can see these stocks had an average of 16.5 hedge funds with bullish positions and the average amount invested in these stocks was $165 million. That figure was $528 million in NXTM’s case. WillScot Corporation (NASDAQ:WSC) is the most popular stock in this table. On the other hand NOW Inc (NYSE:DNOW) is the least popular one with only 11 bullish hedge fund positions. Compared to these stocks NxStage Medical, Inc. (NASDAQ:NXTM) is more popular among hedge funds. Considering that hedge funds are fond of this stock in relation to its market cap peers, it may be a good idea to analyze it in detail and potentially include it in your portfolio.

Hedge Funds Are Dumping Gilead Sciences, Inc. (GILD)
Monthly Newsletter Strategy
Download a free copy of our newsletter and see the details inside!
Hedge Fund Resource Center
Related News
33 Key Stories to Find Out What’s Happening in the Finance World Today 5 Medical Tech Stocks You Should Be Investing In Is NxStage Medical, Inc. (NXTM) A Good Stock To Buy Right Now? Tamarack Capital Management’s Ariad Pharmaceuticals, Inc. (ARIA) Holding Carries It To Strong Q3 Gains The Stock Picks of This Obscure Hedge Fund Returned 70.5% In 2015; See What It’s Betting On in 2016 A Look at Top Picks of This Billion-Dollar Healthcare-Focused Fund NxStage Medical, Inc. (NXTM): Are Hedge Funds Right About This Stock? The 10 Best Islands to Visit in 2019 5 Most Socially Responsible Companies in America 5 Ways You Can Eliminate Credit Card Debt
Billionaire Hedge Funds