Is Nucor Corporation (NUE) A Good Stock To Buy?

Is Nucor Corporation (NYSE:NUE) a good stock to buy right now? We at Insider Monkey like to examine what billionaires and hedge funds think of a company before doing days of research on it. Given their 2 and 20 payment structure, hedge funds have more incentives and resources than the average investor. The funds have access to expert networks and get tips from industry insiders. They also have numerous Ivy League graduates and MBAs. Like everyone else, hedge funds perform miserably at times, but their consensus picks have historically outperformed the market after risk adjustments.

Nucor Corporation (NYSE:NUE) shares haven’t seen a lot of action during the first quarter. Overall, hedge fund sentiment was unchanged. The stock was in 26 hedge funds’ portfolios at the end of March. The level and the change in hedge fund popularity aren’t the only variables you need to analyze to decipher hedge funds’ perspectives. A stock may witness a boost in popularity but it may still be less popular than similarly priced stocks. That’s why at the end of this article we will examine companies such as CBS Corporation (NYSE:CBS), POSCO (NYSE:PKX), and IAC/InterActiveCorp (NASDAQ:IAC) to gather more data points.

At Q1’s end, a total of 26 of the hedge funds tracked by Insider Monkey held long positions in this stock, a change of 0% from the fourth quarter of 2018. By comparison, 33 hedge funds held shares or bullish call options in NUE a year ago. With the smart money’s capital changing hands, there exists a select group of noteworthy hedge fund managers who were boosting their holdings significantly (or already accumulated large positions). 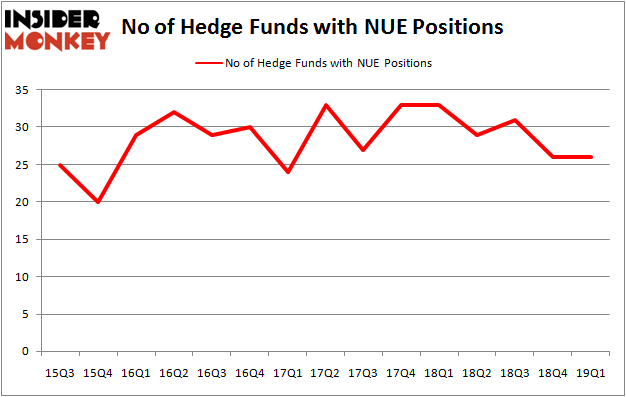 When looking at the institutional investors followed by Insider Monkey, Ken Griffin’s Citadel Investment Group has the largest position in Nucor Corporation (NYSE:NUE), worth close to $53.3 million, comprising less than 0.1%% of its total 13F portfolio. On Citadel Investment Group’s heels is Millennium Management, managed by Israel Englander, which holds a $43.2 million position; the fund has 0.1% of its 13F portfolio invested in the stock. Remaining members of the smart money that hold long positions contain Jonathan Barrett and Paul Segal’s Luminus Management, Ray Dalio’s Bridgewater Associates and John Overdeck and David Siegel’s Two Sigma Advisors.

Seeing as Nucor Corporation (NYSE:NUE) has witnessed declining sentiment from the smart money, it’s easy to see that there lies a certain “tier” of money managers that elected to cut their positions entirely by the end of the third quarter. Interestingly, Steven Richman’s East Side Capital (RR Partners) dumped the largest stake of all the hedgies watched by Insider Monkey, totaling about $55.1 million in stock. Steve Cohen’s fund, Point72 Asset Management, also dropped its stock, about $13.2 million worth. These bearish behaviors are important to note, as total hedge fund interest stayed the same (this is a bearish signal in our experience).

As you can see these stocks had an average of 40.25 hedge funds with bullish positions and the average amount invested in these stocks was $2187 million. That figure was $319 million in NUE’s case. Cheniere Energy, Inc. (NYSE:LNG) is the most popular stock in this table. On the other hand POSCO (NYSE:PKX) is the least popular one with only 11 bullish hedge fund positions. Nucor Corporation (NYSE:NUE) is not the least popular stock in this group but hedge fund interest is still below average. This is a slightly negative signal and we’d rather spend our time researching stocks that hedge funds are piling on. Our calculations showed that top 20 most popular stocks among hedge funds returned 1.9% in Q2 through May 30th and outperformed the S&P 500 ETF (SPY) by more than 3 percentage points. Unfortunately NUE wasn’t nearly as popular as these 20 stocks (hedge fund sentiment was quite bearish); NUE investors were disappointed as the stock returned -15.5% during the same time period and underperformed the market. If you are interested in investing in large cap stocks with huge upside potential, you should check out the top 20 most popular stocks among hedge funds as 13 of these stocks already outperformed the market so far in Q2.