After several tireless days we have finished crunching the numbers from the more than 700 13F filings issued by the successful hedge funds and other investment firms that we track at Insider Monkey, which disclosed those firms’ equity portfolios as of September 30. The results of that effort will be put on display in this article, as we share valuable insight into the smart money sentiment towards Nuance Communications Inc. (NASDAQ:NUAN) .

Nuance Communications Inc. (NASDAQ:NUAN) shareholders have witnessed a decrease in enthusiasm from smart money in recent months. NUAN was in 32 hedge funds’ portfolios at the end of September. There were 33 hedge funds in our database with NUAN holdings at the end of the previous quarter. The level and the change in hedge fund popularity aren’t the only variables you need to analyze to decipher hedge funds’ perspectives. A stock may witness a boost in popularity but it may still be less popular than similarly priced stocks. That’s why at the end of this article we will examine companies such as DCP Midstream Partners, LP (NYSE:DPM), Urban Outfitters, Inc. (NASDAQ:URBN), and Curtiss-Wright Corp. (NYSE:CW) to gather more data points.

What does the smart money think about Nuance Communications Inc. (NASDAQ:NUAN)? 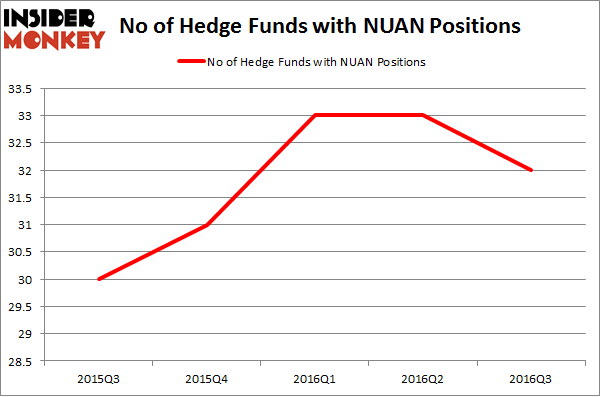 Of the funds tracked by Insider Monkey, Carl Icahn’s Icahn Capital LP has the number one position in Nuance Communications Inc. (NASDAQ:NUAN), worth close to $285.3 million, comprising 1.4% of its total 13F portfolio. On Icahn Capital LP’s heels is AQR Capital Management, led by Cliff Asness, which holds a $74.1 million position. Some other professional money managers with similar optimism consist of Ken Griffin’s Citadel Investment Group, John Overdeck and David Siegel’s Two Sigma Advisors and Glenn Russell Dubin’s Highbridge Capital Management. We should note that none of these hedge funds are among our list of the 100 best performing hedge funds which is based on the performance of their 13F long positions in non-microcap stocks.