Is NRG Energy Inc (NRG) A Good Stock To Buy?

NRG Energy Inc (NYSE:NRG) has seen an increase in hedge fund sentiment lately. NRG was in 50 hedge funds’ portfolios at the end of the third quarter of 2018. There were 49 hedge funds in our database with NRG positions at the end of the previous quarter. Our calculations also showed that NRG isn’t among the 30 most popular stocks among hedge funds.

What have hedge funds been doing with NRG Energy Inc (NYSE:NRG)?

At the end of the third quarter, a total of 50 of the hedge funds tracked by Insider Monkey were bullish on this stock, a change of 2% from the previous quarter. By comparison, 49 hedge funds held shares or bullish call options in NRG heading into this year. With hedgies’ positions undergoing their usual ebb and flow, there exists a select group of key hedge fund managers who were upping their stakes substantially (or already accumulated large positions). 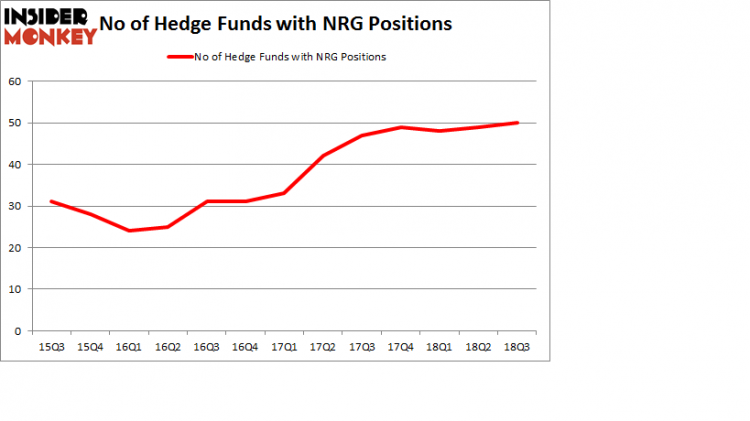 More specifically, Brahman Capital was the largest shareholder of NRG Energy Inc (NYSE:NRG), with a stake worth $426.9 million reported as of the end of September. Trailing Brahman Capital was Steadfast Capital Management, which amassed a stake valued at $270.8 million. Adage Capital Management, Renaissance Technologies, and Millennium Management were also very fond of the stock, giving the stock large weights in their portfolios.

Consequently, specific money managers were leading the bulls’ herd. Electron Capital Partners, managed by Jos Shaver, assembled the most outsized position in NRG Energy Inc (NYSE:NRG). Electron Capital Partners had $53.7 million invested in the company at the end of the quarter. Robert B. Gillam’s McKinley Capital Management also made a $13.3 million investment in the stock during the quarter. The other funds with new positions in the stock are Dmitry Balyasny’s Balyasny Asset Management, Daniel Lascano’s Lomas Capital Management, and Ray Dalio’s Bridgewater Associates.

As you can see these stocks had an average of 27.5 hedge funds with bullish positions and the average amount invested in these stocks was $966 million. That figure was $2.19 billion in NRG’s case. Ally Financial Inc (NYSE:ALLY) is the most popular stock in this table. On the other hand Canopy Growth Corporation (NYSE:CGC) is the least popular one with only 16 bullish hedge fund positions. Compared to these stocks NRG Energy Inc (NYSE:NRG) is more popular among hedge funds. Considering that hedge funds are fond of this stock in relation to its market cap peers, it may be a good idea to analyze it in detail and potentially include it in your portfolio.