NOW Inc (NYSE:DNOW) shares haven’t seen a lot of action during the first quarter. Overall, hedge fund sentiment was unchanged. The stock was in 14 hedge funds’ portfolios at the end of March. The level and the change in hedge fund popularity aren’t the only variables you need to analyze to decipher hedge funds’ perspectives. A stock may witness a boost in popularity but it may still be less popular than similarly priced stocks. That’s why at the end of this article we will examine companies such as Medifast, Inc. (NYSE:MED), SPX Corporation (NYSE:SPXC), and BrightView Holdings, Inc. (NYSE:BV) to gather more data points.

At the moment there are numerous indicators stock market investors put to use to size up publicly traded companies. Some of the best indicators are hedge fund and insider trading sentiment. Our experts have shown that, historically, those who follow the best picks of the top hedge fund managers can outclass the S&P 500 by a very impressive margin (see the details here).

What have hedge funds been doing with NOW Inc (NYSE:DNOW)? 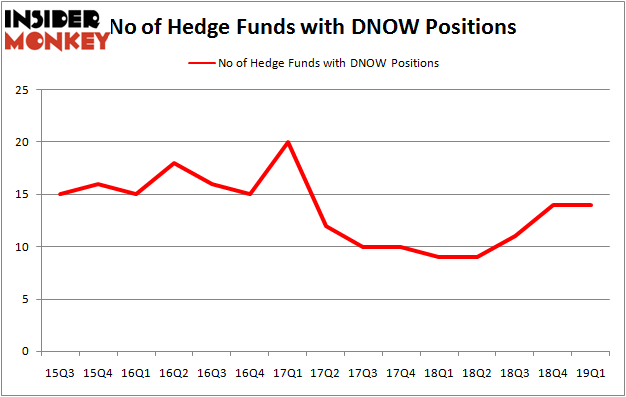 The largest stake in NOW Inc (NYSE:DNOW) was held by D E Shaw, which reported holding $31.1 million worth of stock at the end of March. It was followed by Millennium Management with a $27.8 million position. Other investors bullish on the company included Cove Street Capital, Renaissance Technologies, and Arrowstreet Capital.

Judging by the fact that NOW Inc (NYSE:DNOW) has experienced bearish sentiment from the aggregate hedge fund industry, logic holds that there lies a certain “tier” of fund managers that decided to sell off their entire stakes last quarter. At the top of the heap, John Overdeck and David Siegel’s Two Sigma Advisors said goodbye to the biggest investment of the “upper crust” of funds tracked by Insider Monkey, comprising about $0.2 million in stock. Dmitry Balyasny’s fund, Balyasny Asset Management, also dropped its stock, about $0.1 million worth. These transactions are intriguing to say the least, as total hedge fund interest stayed the same (this is a bearish signal in our experience).

As you can see these stocks had an average of 19.25 hedge funds with bullish positions and the average amount invested in these stocks was $315 million. That figure was $99 million in DNOW’s case. Medifast, Inc. (NYSE:MED) is the most popular stock in this table. On the other hand BrightView Holdings, Inc. (NYSE:BV) is the least popular one with only 9 bullish hedge fund positions. NOW Inc (NYSE:DNOW) is not the least popular stock in this group but hedge fund interest is still below average. This is a slightly negative signal and we’d rather spend our time researching stocks that hedge funds are piling on. Our calculations showed that top 20 most popular stocks among hedge funds returned 6.2% in Q2 through June 19th and outperformed the S&P 500 ETF (SPY) by nearly 3 percentage points. Unfortunately DNOW wasn’t nearly as popular as these 20 stocks (hedge fund sentiment was quite bearish); DNOW investors were disappointed as the stock returned -2.6% during the same time period and underperformed the market. If you are interested in investing in large cap stocks with huge upside potential, you should check out the top 20 most popular stocks among hedge funds as 13 of these stocks already outperformed the market so far in Q2.