Is Now a Great Time to Buy Abbott Laboratories (ABT)?

Abbott Laboratories (NYSE:ABT) stock is down almost 8% since the end of May. Is now a good time to buy? Let’s take a look.

Anatomy of a pullback
There’s no question that Abbott Laboratories (NYSE:ABT) started 2013 with a bang. The year began with the spinoff of AbbVie Inc (NYSE:ABBV). By the latter part of May, shares were up more than 20%. Then came the slide. 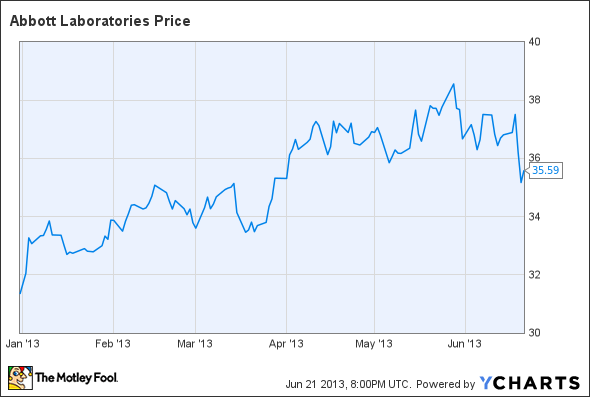 ABT data by YCharts

What happened? Although the company announced first-quarter results just days before the decline, those results weren’t at fault. Abbott Laboratories (NYSE:ABT) reported solid if not spectacular numbers for the period.

Instead, a primary culprit in this case appears to be the drag of the overall market. The S&P 500 index is down 4% since late May. Abbott Laboratories (NYSE:ABT)’s drop has been larger, but there haven’t been any negatives specific to the company that appear to have contributed to the decline.

Relatively speaking
We could look at several aspects of Abbott Laboratories stock and conclude that now is definitely a great time to buy. The trailing price-to-earnings multiple of below 11 seems to be attractive. Abbott Laboratories (NYSE:ABT) boasts a return on equity of more than 25%, a number nearly any company would be happy to claim.

It might be beneficial to examine things a little more closely, though. That P/E multiple just shy of 11 actually is near the highest level over the past five years. And most of those five years included the growth engine of Humira, which now solely belongs to AbbVie Inc (NYSE:ABBV) and not Abbott.

The one company that probably compares best with Abbott in terms of business models also looks like a more compelling buy. Johnson & Johnson (NYSE:JNJ) is up nearly 17% year to date — much better performance than Abbott Labs. J&J’s dividend yield of 3.1% also ranks higher.

On the other hand, Johnson & Johnson (NYSE:JNJ)’s stock is valued more highly than Abbott’s — with a trailing P/E of nearly 23. J&J also doesn’t stack up as well on another important metric. Its return on equity of 15.76% stands well below that of Abbott Laboratories (NYSE:ABT).

Foolish take
My view not long ago was that Abbott was a decent stock pick. I haven’t changed that opinion.

The company’s nutrition products group continues to perform well. Emerging markets, in particular, hold a lot of promise. If Abbott could get its established pharmaceuticals and medical-devices segments firing on all cylinders, it should really do well.

The recent pullback presents a positive in that Abbott Laboratories stock is even more attractively valued. However, because much of the decline is due to the overall market climate, continued macro concerns could bring shares down even more.

Over the long run, though, I like Abbott. Sure, there are health-care stocks that probably present better opportunities. But is now a good time to buy Abbott Laboratories stock? This Fool says “yes.”

The article Is Now a Great Time to Buy Abbott Laboratories Stock? originally appeared on Fool.com and is written by Keith Speights.

Fool contributor Keith Speights has no position in any stocks mentioned. The Motley Fool recommends and owns shares of Johnson & Johnson.