Is Novanta Inc. (NOVT) A Good Stock To Buy?

Legendary investors such as Leon Cooperman and Seth Klarman earn enormous amounts of money for themselves and their investors by doing in-depth research on small-cap stocks that big brokerage houses don’t publish. Small cap stocks -especially when they are screened well- can generate substantial outperformance versus a boring index fund. That’s why we analyze the activity of those elite funds in these small-cap stocks. In the following paragraphs, we analyze Novanta Inc. (NASDAQ:NOVT) from the perspective of those elite funds.

Novanta Inc. (NASDAQ:NOVT) investors should be aware of an increase in hedge fund interest recently. NOVT was in 17 hedge funds’ portfolios at the end of the third quarter of 2018. There were 16 hedge funds in our database with NOVT holdings at the end of the previous quarter. Our calculations also showed that novt isn’t among the 30 most popular stocks among hedge funds.

How have hedgies been trading Novanta Inc. (NASDAQ:NOVT)?

At the end of the third quarter, a total of 17 of the hedge funds tracked by Insider Monkey were bullish on this stock, a change of 6% from one quarter earlier. On the other hand, there were a total of 14 hedge funds with a bullish position in NOVT at the beginning of this year. With hedge funds’ sentiment swirling, there exists a few notable hedge fund managers who were adding to their holdings significantly (or already accumulated large positions). 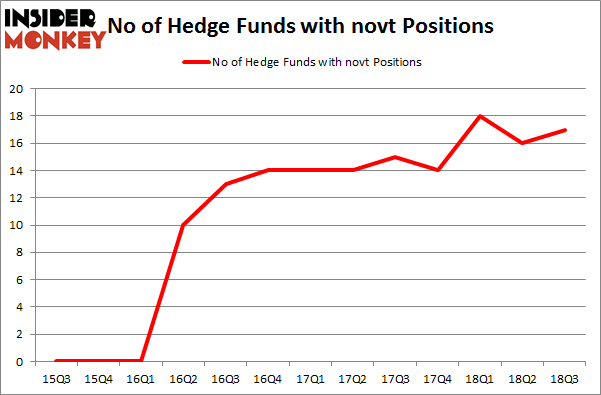 More specifically, Renaissance Technologies was the largest shareholder of Novanta Inc. (NASDAQ:NOVT), with a stake worth $42.9 million reported as of the end of September. Trailing Renaissance Technologies was Daruma Asset Management, which amassed a stake valued at $36.8 million. AlphaOne Capital Partners, Royce & Associates, and Sandler Capital Management were also very fond of the stock, giving the stock large weights in their portfolios.

As one would reasonably expect, specific money managers have jumped into Novanta Inc. (NASDAQ:NOVT) headfirst. Ellington, managed by Mike Vranos, initiated the most outsized position in Novanta Inc. (NASDAQ:NOVT). Ellington had $0.8 million invested in the company at the end of the quarter. David Costen Haley’s HBK Investments also initiated a $0.6 million position during the quarter. The other funds with brand new NOVT positions are Michael Platt and William Reeves’s BlueCrest Capital Mgmt., Noam Gottesman’s GLG Partners, and Andrew Feldstein and Stephen Siderow’s Blue Mountain Capital.

Let’s go over hedge fund activity in other stocks – not necessarily in the same industry as Novanta Inc. (NASDAQ:NOVT) but similarly valued. We will take a look at CenterState Bank Corporation (NASDAQ:CSFL), Cirrus Logic, Inc. (NASDAQ:CRUS), Intrexon Corp (NASDAQ:XON), and PQ Group Holdings Inc. (NYSE:PQG). All of these stocks’ market caps are closest to NOVT’s market cap.

As you can see these stocks had an average of 14.5 hedge funds with bullish positions and the average amount invested in these stocks was $144 million. That figure was $109 million in NOVT’s case. Cirrus Logic, Inc. (NASDAQ:CRUS) is the most popular stock in this table. On the other hand Intrexon Corp (NASDAQ:XON) is the least popular one with only 9 bullish hedge fund positions. Novanta Inc. (NASDAQ:NOVT) is not the most popular stock in this group but hedge fund interest is still above average. This is a slightly positive signal but we’d rather spend our time researching stocks that hedge funds are piling on. In this regard CRUS might be a better candidate to consider a long position.