Every investor can appreciate a stock that consistently beats the Street without getting ahead of its fundamentals and risking a meltdown. The best stocks offer sustainable market-beating gains, with improving financial metrics that support strong price growth. Let’s take a look at what Nokia Corporation (ADR) (NYSE:NOK)‘s recent results tell us about its potential for future gains.

What the numbers tell you
The graphs you’re about to see tell Nokia Corporation (ADR) (NYSE:NOK)’s story, and we’ll be grading the quality of that story in several ways.

Growth is important on both top and bottom lines, and an improving profit margin is a great sign that a company’s become more efficient over time. Since profits may not always reported at a steady rate, we’ll also look at how much Nokia’s free cash flow has grown in comparison to its net income.

A company that generates more earnings per share over time, regardless of the number of shares outstanding, is heading in the right direction. If Nokia’s share price has kept pace with its earnings growth, that’s another good sign that its stock can move higher.

Is Nokia Corporation (ADR) (NYSE:NOK) managing its resources well? A company’s return on equity should be improving, and its debt-to-equity ratio declining, if it’s to earn our approval.

Healthy dividends are always welcome, so we’ll also make sure that Nokia’s dividend payouts are increasing, but at a level that can be sustained by its free cash flow.

By the numbers
Now, let’s take a look at Nokia’s key statistics: 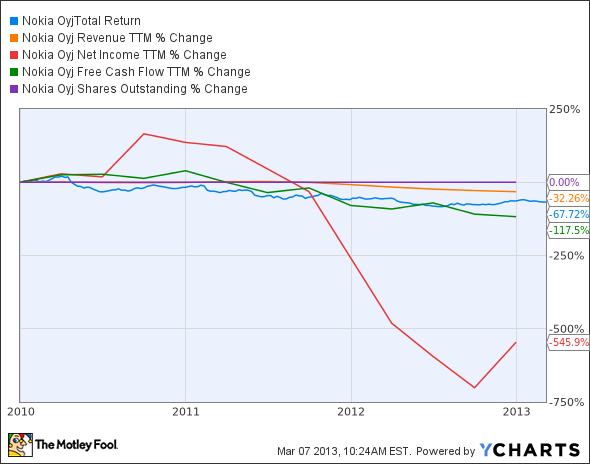 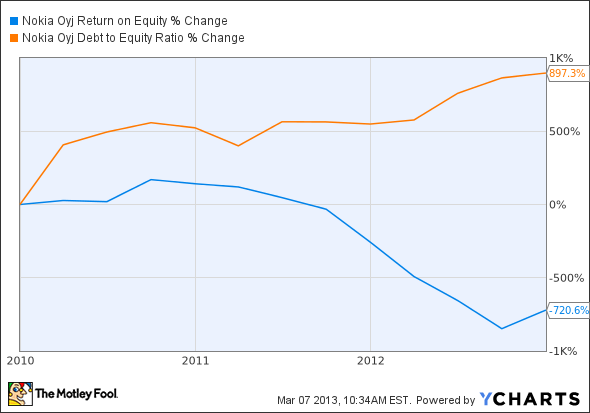 How we got here and where we’re going
It should come as no surprise that Nokia’s endured a particularly brutal stretch over the past three years. Nokia Corporation (ADR) (NYSE:NOK) can only earn eight passing grades as a result of its recent dividend suspension — which may help boost the company’s shrinking cash pile this year, but which also results in a failing grade as far as dividend growth is concerned. Out of these eight opportunities, the Finnish phone maker earns merely one passing grade, and then mainly by technicality. Is there hope for a turnaround in 2013, or is this former high-yielder hopeless in the near term?

I came together with two of my fellow Fools to predict Nokia’s outperformance last summer, based largely on the fact that it was undervalued from a fundamental standpoint. After initially being rewarded with a big bounce into the new year, we’ve had to endure a rough patch in 2013. My fellow Fool Sean Williams gave Nokia Corporation (ADR) (NYSE:NOK) a rough valuation range of $3.53 to $3.66 per share based on patents and other holdings, and as of this writing it’s still above that level in spite of its 2013 slide. That seems to indicate a limited upside on a fundamental revaluation level, but by now the market has shifted its expectations toward smartphone success — or failure, if the year’s decline is any indication.