Is Noble Energy, Inc. (NYSE:NBL) Worthy of Your Portfolio?

Looking for stocks with high upside potential? Just follow the big players within the hedge fund industry. Why should you do so? Let’s take a brief look at what statistics have to say about hedge funds’ stock picking abilities to illustrate. The Standard and Poor’s 500 Index returned approximately 5.7% in the 12 months ending October 26 (including dividend payments). Conversely, hedge funds’ 30 preferred S&P 500 stocks (as of June 2014) generated a return of 15.1% during the same 12-month period, with 53% of these stock picks outperforming the broader market benchmark. Coincidence? It might happen to be so, but it is unlikely. Our research covering the last 18 years indicates that hedge funds’ stock picks generate superior risk-adjusted returns. That’s why we believe it is wise to check hedge fund activity before you invest your time or your savings on a stock like Noble Energy, Inc. (NYSE:NBL).

Is Noble Energy, Inc. (NYSE:NBL) the right pick for your portfolio? The smart money is getting less optimistic. The number of long hedge fund bets retreated by 6 lately, and therefore, at the end of the third quarter, there were 26 hedge funds with long holdings of the stock in our database. Not only that the fund has seen a decrease in enthusiasm from smart money investors in the recent period, it also hasn’t attracted many billionaires. (If you are interested to read which stocks did, then go to 30 stocks billionaires are crazy about: Insider Monkey billionaires stock index. ) Nevertheless, we were still interested in analyzing this stock furthermore, and we were gathering more data about it. During our research, we tracked down Poplar Forest Capital’s Quarterly Letter, in which  this employee-owned investment manager, shares its views on the stock. We bring you that part of the letter:

“Noble Energy (ticker: NBL) is a large cap E&P with a diversified asset base across US shale (Permian, DJ Basin, Eagle Ford) and international offshore markets. Recent concerns over pipeline constraints in the Permian and potential ballot measures in Colorado have created a compelling opportunity. Double digit production growth in the US and the start-up of its high value Leviathan project in Israel are forecast to double operating cash flow by 2020. At current prices, we believe we get Leviathan’s approximate $2 per share of cash flow for “free.” In our view, its investment grade balance sheet, dividend and share buybacks mitigate downside risk.”

In the eyes of most stock holders, hedge funds are assumed to be slow, outdated financial tools of yesteryear. While there are greater than 8000 funds in operation at the moment, Our researchers look at the leaders of this club, approximately 700 funds. These investment experts orchestrate bulk of the smart money’s total capital, and by observing their top investments, Insider Monkey has discovered several investment strategies that have historically exceeded the market. Insider Monkey’s flagship hedge fund strategy outstripped the S&P 500 index by 6 percentage points annually since its inception in May 2014 through early November 2018. We were able to generate large returns even by identifying short candidates. Our portfolio of short stocks lost 26.1% since February 2017 even though the market was up nearly 19% during the same period. We just shared a list of 11 short targets in our latest quarterly update.

Heading into the fourth quarter of 2018, a total of 26 of the hedge funds tracked by Insider Monkey held long positions in this stock, a drop of 19% from the previous quarter. Below, you can check out the change in hedge fund sentiment towards NBL over the last 13 quarters. With the smart money’s positions undergoing their usual ebb and flow, there exists a select group of key hedge fund managers who were boosting their stakes significantly (or already accumulated large positions). 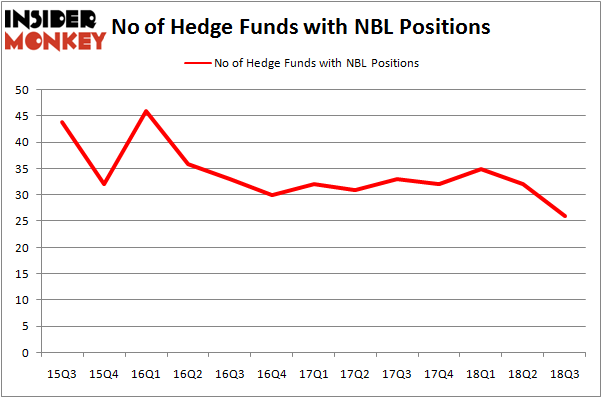 Of the funds tracked by Insider Monkey, Adage Capital Management, managed by Phill Gross and Robert Atchinson, holds the number one position in Noble Energy, Inc. (NYSE:NBL). Adage Capital Management has a $460 million position in the stock, comprising 1% of its 13F portfolio. Coming in second is Eagle Capital Management, led by Boykin Curry, holding a $276.4 million position; the fund has 0.9% of its 13F portfolio invested in the stock. Other members of the smart money that are bullish encompass MacKenzie B. Davis and Kenneth L. Settles Jr’s SailingStone Capital Partners, Andrew Feldstein and Stephen Siderow’s Blue Mountain Capital and Steve Cohen’s Point72 Asset Management.

Because Noble Energy, Inc. (NYSE:NBL) has witnessed bearish sentiment from the aggregate hedge fund industry, it’s safe to say that there was a specific group of fund managers that elected to cut their entire stakes heading into Q3. It’s worth mentioning that Robert Pohly’s Samlyn Capital said goodbye to the biggest stake of the “upper crust” of funds followed by Insider Monkey, totaling close to $18.9 million in stock, and Anand Parekh’s Alyeska Investment Group was right behind this move, as the fund cut about $15.9 million worth. These bearish behaviors are important to note, as total hedge fund interest dropped by 6 funds heading into Q3.

As you can see these stocks had an average of 31 hedge funds with bullish positions and the average amount invested in these stocks was $1.55 billion. That figure was $995 million in NBL’s case. MGM Resorts International (NYSE:MGM) is the most popular stock in this table. On the other hand Waters Corporation (NYSE:WAT) is the least popular one with only 23 bullish hedge fund positions. Noble Energy, Inc. (NYSE:NBL) is not the least popular stock in this group but hedge fund interest is still below average. This is a slightly negative signal and we’d rather spend our time researching stocks that hedge funds are piling on. In this regard MGM might be a better candidate to consider a long position.