Is New York REIT Inc (NYSE:NYRT) a good equity to bet on right now? We like to check what the smart money thinks first before doing extensive research. Although there have been several high profile failed hedge fund picks, the consensus picks among hedge fund investors have historically outperformed the market after adjusting for known risk attributes. It’s not surprising given that hedge funds have access to better information and more resources to find the latest market-moving information.

Hedge fund interest in New York REIT Inc (NYSE:NYRT) shares was flat at the end of last quarter. This is usually a negative indicator. At the end of this article we will also compare NYRT to other stocks including Culp, Inc. (NYSE:CULP), Red Lion Hotels Corporation (NYSE:RLH), and Willdan Group, Inc. (NASDAQ:WLDN) to get a better sense of its popularity. Our calculations show that the company was not one of the 30 most popular stocks among hedge funds.

In the eyes of most shareholders, hedge funds are perceived as worthless, outdated financial tools of the past. While there are over 8000 funds trading today, Our experts choose to focus on the crème de la crème of this group, around 700 funds. It is estimated that this group of investors manage the majority of the smart money’s total capital, and by keeping track of their top investments, Insider Monkey has figured out a few investment strategies that have historically outperformed the broader indices. Insider Monkey’s flagship hedge fund strategy outperformed the S&P 500 index by 6 percentage points annually since its inception in May 2014 through early November 2018. We were able to generate large returns even by identifying short candidates. Our portfolio of short stocks lost 26.1% since February 2017 even though the market was up nearly 19% during the same period. We just shared a list of 11 short targets in our latest quarterly update.

While collecting data on the company, we found Wiedower Capital’s Quarterly Letter to its shareholders. Calling investing in the company, which is liquidating, a misstep, Managing Director Travis Wiedower had this to say in his report:

“New York REIT was my biggest mistake of 2017, both in terms of brain drain and our AUM. Overall it hurt our results by around 2.8%. As a reminder, New York REIT owns properties in New York City and announced their intent to liquidate in late 2016. Estimating their liquidation value to be 10-30% higher than the share price at the time, I started buying shares in December 2016 and added more in 2017. Looking back at my notes from around the time I initially invested, I don’t necessarily disagree with my logic at the time. What I didn’t put enough weight on was the chances of New York City cap rates increasing.

What have hedge funds been doing with New York REIT Inc (NYSE:NYRT)?

At Q3’s end, a total of 15 of the hedge funds tracked by Insider Monkey held long positions in this stock, a change of 0% from one quarter earlier. Below, you can check out the change in hedge fund sentiment towards NYRT over the last 13 quarters. With the smart money’s sentiment swirling, there exists a select group of key hedge fund managers who were adding to their stakes considerably (or already accumulated large positions). 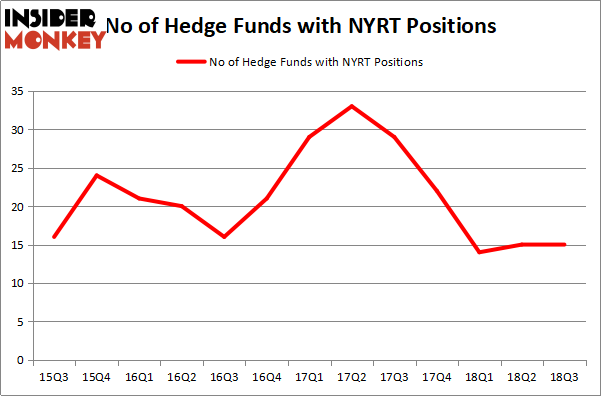 Among these funds, Indaba Capital Management held the most valuable stake in New York REIT Inc (NYSE:NYRT), which was worth $29.9 million at the end of the third quarter. On the second spot was 683 Capital Partners which amassed $15.5 million worth of shares. Moreover, Renaissance Technologies, Snow Park Capital Partners, and Owl Creek Asset Management were also bullish on New York REIT Inc (NYSE:NYRT), allocating a large percentage of their portfolios to this stock.

Seeing as New York REIT Inc (NYSE:NYRT) has experienced bearish sentiment from hedge fund managers, logic holds that there were a few fund managers who sold off their positions entirely heading into Q3. It’s worth mentioning that John Khoury’s Long Pond Capital sold off the largest position of all the hedgies tracked by Insider Monkey, totaling an estimated $13 million in stock, and Thomas Ellis and Todd Hammer’s North Run Capital was right behind this move, as the fund dumped about $5.3 million worth. These transactions are interesting, as total hedge fund interest stayed the same (this is a bearish signal in our experience).

As you can see these stocks had an average of 4.5 hedge funds with bullish positions and the average amount invested in these stocks was $30 million. That figure was $70 million in NYRT’s case. Red Lion Hotels Corporation (NYSE:RLH) is the most popular stock in this table. On the other hand Biofrontera AG (NASDAQ:BFRA) is the least popular one with only 1 bullish hedge fund positions. Compared to these stocks New York REIT Inc (NYSE:NYRT) is more popular among hedge funds. Considering that hedge funds are fond of this stock in relation to its market cap peers, it may be a good idea to analyze it in detail and potentially include it in your portfolio.