Published on December 9, 2018 at 7:31 pm by Reymerlyn Martin in Hedge Funds,News

The 700+ hedge funds and money managers tracked by Insider Monkey have already compiled and submitted their 13F filings for the second quarter, which unveil their equity positions as of September 30. We went through these filings, fixed typos and other more significant errors and identified the changes in hedge fund positions. Our extensive review of these public filings is finally over, so this article is set to reveal the smart money sentiment towards New Oriental Education & Tech Group Inc. (NYSE:EDU).

New Oriental Education & Tech Group Inc. (NYSE:EDU) investors should be aware of a decrease in support from the world’s most elite money managers in recent months. Our calculations also showed that EDU isn’t among the 30 most popular stocks among hedge funds. 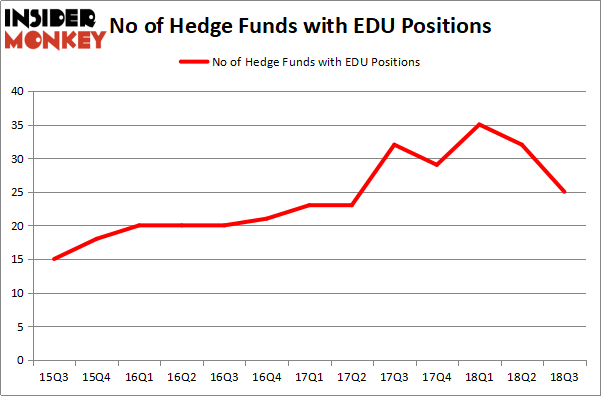 Among these funds, Melvin Capital Management held the most valuable stake in New Oriental Education & Tech Group Inc. (NYSE:EDU), which was worth $232.8 million at the end of the third quarter. On the second spot was Tiger Global Management LLC which amassed $225.8 million worth of shares. Moreover, Melvin Capital Management, Renaissance Technologies, and Citadel Investment Group were also bullish on New Oriental Education & Tech Group Inc. (NYSE:EDU), allocating a large percentage of their portfolios to this stock.

Since New Oriental Education & Tech Group Inc. (NYSE:EDU) has experienced declining sentiment from the aggregate hedge fund industry, logic holds that there is a sect of hedge funds that elected to cut their full holdings by the end of the third quarter. Interestingly, J Kevin Kenny Jr’s Emerging Sovereign Group cut the largest investment of the “upper crust” of funds tracked by Insider Monkey, comprising an estimated $53.5 million in stock, and David Tepper’s Appaloosa Management LP was right behind this move, as the fund dropped about $34.1 million worth. These transactions are important to note, as total hedge fund interest dropped by 7 funds by the end of the third quarter.

As you can see these stocks had an average of 19 hedge funds with bullish positions and the average amount invested in these stocks was $372 million. That figure was $915 million in EDU’s case. Kansas City Southern (NYSE:KSU) is the most popular stock in this table. On the other hand Braskem SA (NYSE:BAK) is the least popular one with only 13 bullish hedge fund positions. Compared to these stocks New Oriental Education & Tech Group Inc. (NYSE:EDU) is more popular among hedge funds. Considering that hedge funds are fond of this stock in relation to its market cap peers, it may be a good idea to analyze it in detail and potentially include it in your portfolio.