Is Nevsun Resources Ltd. (NSU) A Good Stock To Buy?

Is Nevsun Resources Ltd. (NYSEAMEX:NSU) the right pick for your portfolio? Money managers are betting on the stock. The number of bullish hedge fund bets inched up by 7 in recent months. Our calculations also showed that nsu isn’t among the 30 most popular stocks among hedge funds.

If you’d ask most investors, hedge funds are perceived as unimportant, outdated investment vehicles of yesteryear. While there are more than 8,000 funds trading today, Our researchers look at the aristocrats of this club, approximately 700 funds. These hedge fund managers handle bulk of the hedge fund industry’s total capital, and by paying attention to their highest performing equity investments, Insider Monkey has discovered many investment strategies that have historically defeated the broader indices. Insider Monkey’s flagship hedge fund strategy surpassed the S&P 500 index by 6 percentage points per annum since its inception in May 2014 through early November 2018. We were able to generate large returns even by identifying short candidates. Our portfolio of short stocks lost 24% since February 2017 (through December 3rd) even though the market was up nearly 23% during the same period. We just shared a list of 11 short targets in our latest quarterly update.

What have hedge funds been doing with Nevsun Resources Ltd. (NYSEAMEX:NSU)? 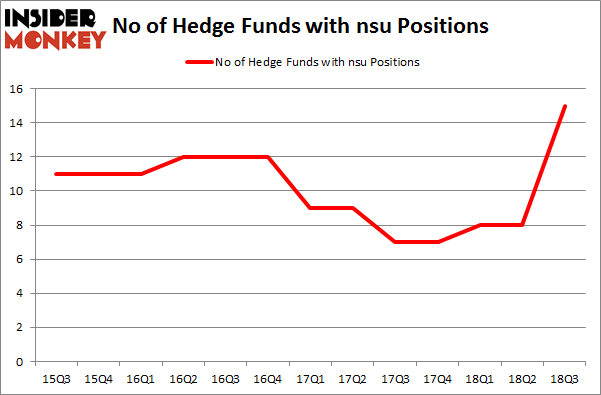 Of the funds tracked by Insider Monkey, Magnetar Capital, managed by Alec Litowitz and Ross Laser, holds the number one position in Nevsun Resources Ltd. (NYSEAMEX:NSU). Magnetar Capital has a $55.4 million position in the stock, comprising 1% of its 13F portfolio. The second most bullish fund manager is Halcyon Asset Management, managed by John Bader, which holds a $41.3 million position; the fund has 5.1% of its 13F portfolio invested in the stock. Some other peers that hold long positions comprise Noam Gottesman’s GLG Partners, Ben Levine, Andrew Manuel and Stefan Renold’s LMR Partners and Robert Emil Zoellner’s Alpine Associates.

Now, some big names were leading the bulls’ herd. Magnetar Capital, managed by Alec Litowitz and Ross Laser, assembled the largest position in Nevsun Resources Ltd. (NYSEAMEX:NSU). Magnetar Capital had $55.4 million invested in the company at the end of the quarter. John Bader’s Halcyon Asset Management also made a $41.3 million investment in the stock during the quarter. The other funds with brand new NSU positions are Ben Levine, Andrew Manuel and Stefan Renold’s LMR Partners, Robert Emil Zoellner’s Alpine Associates, and Shane Finemore’s Manikay Partners.

As you can see these stocks had an average of 16.75 hedge funds with bullish positions and the average amount invested in these stocks was $124 million. That figure was $243 million in NSU’s case. BrightSphere Investment Group plc (NYSE:BSIG) is the most popular stock in this table. On the other hand Standex International Corporation (NYSE:SXI) is the least popular one with only 12 bullish hedge fund positions. Nevsun Resources Ltd. (NYSE:NSU) is not the least popular stock in this group but hedge fund interest is still below average. This is a slightly negative signal and we’d rather spend our time researching stocks that hedge funds are piling on. In this regard BSIG might be a better candidate to consider a long position.