Is Nevro Corp (NVRO) A Good Stock To Buy ?

Is Nevro Corp (NYSE:NVRO) a healthy stock for your portfolio? The best stock pickers are in a bullish mood. The number of long hedge fund positions moved up by 12 recently. Our calculations also showed that nvro isn’t among the 30 most popular stocks among hedge funds.

How have hedgies been trading Nevro Corp (NYSE:NVRO)? 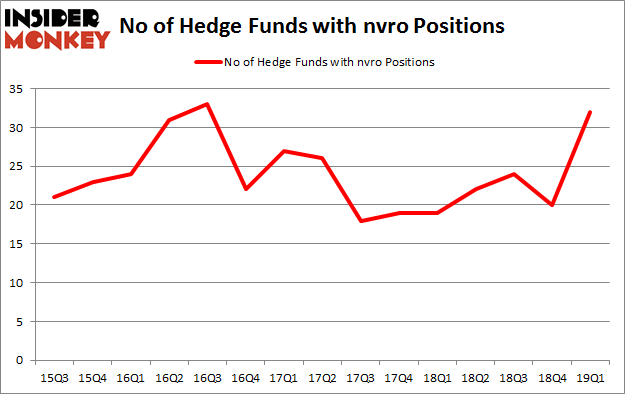 Among these funds, D E Shaw held the most valuable stake in Nevro Corp (NYSE:NVRO), which was worth $115.7 million at the end of the first quarter. On the second spot was Millennium Management which amassed $69.4 million worth of shares. Moreover, Partner Fund Management, Adage Capital Management, and Broadfin Capital were also bullish on Nevro Corp (NYSE:NVRO), allocating a large percentage of their portfolios to this stock.

With a general bullishness amongst the heavyweights, key hedge funds have been driving this bullishness. Perceptive Advisors, managed by Joseph Edelman, established the most outsized position in Nevro Corp (NYSE:NVRO). Perceptive Advisors had $26.1 million invested in the company at the end of the quarter. Arthur B Cohen and Joseph Healey’s Healthcor Management LP also initiated a $16.1 million position during the quarter. The following funds were also among the new NVRO investors: Jim Simons’s Renaissance Technologies, Daniel Beltzman and Gergory Smith’s Birch Run Capital, and Roberto Mignone’s Bridger Management.