It is already common knowledge that individual investors do not usually have the necessary resources and abilities to properly research an investment opportunity. As a result, most investors pick their illusory “winners” by making a superficial analysis and research that leads to poor performance on aggregate. Since stock returns aren’t usually symmetrically distributed and index returns are more affected by a few outlier stocks (i.e. the FAANG stocks dominating and driving S&P 500 Index’s returns in recent years), more than 50% of the constituents of the Standard and Poor’s 500 Index underperform the benchmark. Hence, if you randomly pick a stock, there is more than 50% chance that you’d fail to beat the market. At the same time, the 30 most favored S&P 500 stocks by the hedge funds monitored by Insider Monkey generated a return of 15.1% over the last 12 months (vs. 5.6% gain for SPY), with 53% of these stocks outperforming the benchmark. Of course, hedge funds do make wrong bets on some occasions and these get disproportionately publicized on financial media, but piggybacking their moves can beat the broader market on average. That’s why we are going to go over recent hedge fund activity in Netflix, Inc. (NASDAQ:NFLX).

Is Netflix, Inc. (NASDAQ:NFLX) a bargain? Money managers are getting less optimistic. The number of bullish hedge fund bets dropped by 9 recently. Despite this, Netflix was still the 30th most popular stock among hedge funds at the end of the second quarter (see the list of 25 most popular stocks among hedge funds). This doesn’t mean that there aren’t hedge funds shorting the stock. Last summer David Einhorn revealed his feelings towards Netflix in his second quarter investor letter by saying “the company’s key metrics are all deteriorating and customer acquisition costs are higher, yet the stock ended the quarter up 1% to $149.41.”

On the other hand Mott Capital was very bullish at the beginning of this year:

“Netflix had an incredible run in 2017, driven by strong subscriber growth, and a significant effort to strengthen its content library. Netflix should have another strong 2018 because many of the trends seen in 2017, will continue building. Netflix has a tremendous global reach, and international subscriber growth is still very much in the initial stages. Netflix is establishing itself a global media powerhouse and is the clear-cut leader in streaming media content.”

According to most market participants, hedge funds are seen as worthless, old financial vehicles of yesteryear. While there are more than 8000 funds in operation at present, Our experts choose to focus on the moguls of this group, around 700 funds. These investment experts preside over the lion’s share of all hedge funds’ total asset base, and by following their best picks, Insider Monkey has revealed a few investment strategies that have historically outpaced the S&P 500 index. Insider Monkey’s flagship best performing hedge funds strategy returned 17.4% year to date and outperformed the market by more than 14 percentage points this year. This strategy also outperformed the market by 3 percentage points in the fourth quarter despite the market volatility (see the details here). 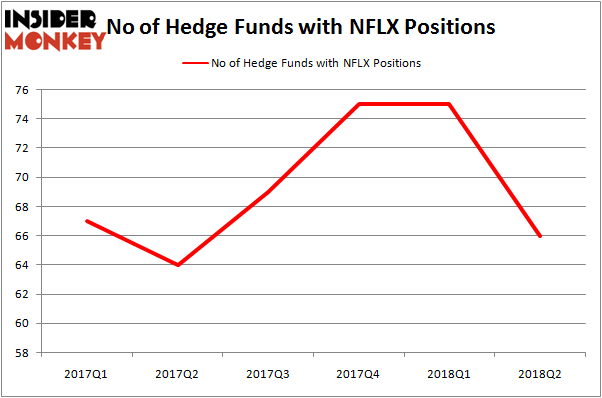 Among these funds, SRS Investment Management held the most valuable stake in Netflix, Inc. (NASDAQ:NFLX), which was worth $1902.3 millions at the end of the second quarter. On the second spot was Citadel Investment Group which amassed $1254.4 millions worth of shares. Moreover, Matrix Capital Management, Teewinot Capital Advisers, and EMS Capital were also bullish on Netflix, Inc. (NASDAQ:NFLX), allocating a large percentage of their portfolios to this stock.

Seeing as Netflix, Inc. (NASDAQ:NFLX) has experienced a decline in interest from the smart money, it’s safe to say that there exists a select few funds that elected to cut their entire stakes last quarter. Interestingly, Steve Cohen’s Point72 Asset Management sold off the largest investment of all the hedgies tracked by Insider Monkey, totaling an estimated $190.4 million in stock, and Matt Sirovich and Jeremy Mindich’s Scopia Capital was right behind this move, as the fund cut about $172.6 million worth. These moves are important to note, as aggregate hedge fund interest was cut by 9 funds last quarter.

As you can see these stocks had an average of 36.25 hedge funds with bullish positions and the average amount invested in these stocks was $2648 million. That figure was $8754 million in NFLX’s case. Merck & Co., Inc. (NYSE:MRK) is the most popular stock in this table. On the other hand TOTAL S.A. (ADR) (NYSE:TOT) is the least popular one with only 13 bullish hedge fund positions. Compared to these stocks Netflix, Inc. (NASDAQ:NFLX) is more popular among hedge funds.

We view Netflix as a battleground stock. There are dozens of very bullish fund managers but there are also very credible critics. For example earlier this summer Citron Research said the following about the stock:

Citron’s latest report took aim at Netflix, calling for the stock to retreat by 13% to the $340 mark. Such a pullback would still leave Netflix with gains of 70% in 2018 and would only pull the stock back to late-May levels. Unlike in Inogen’s case, Citron’s report did nothing to slow the relentless advance of Netflix shares, which gained 3% on the day it was released.

Citron’s case against Netflix, Inc. (NASDAQ:NFLX) focused on the glut of wealthy competitors in the streaming space or about to enter it, including Apple Inc. (NASDAQ:AAPL), Alphabet Inc (NASDAQ:GOOGL), Walt Disney Co (NYSE:DIS), and Amazon.com, Inc. (NASDAQ:AMZN). According to Citron, none of those competitors even need to beat Netflix for the company’s stock to start feeling the pain, all they need to do is slow Netflix’s growth.

Citron also notes that if Wall Street began to judge Netflix as a media company rather than as a tech company, which is arguably how it should be classified, its numbers don’t look at all elegant when compared to the overall revenue and free cash flow generation of media behemoths like Disney and Comcast Corporation (NASDAQ:CMCSA).

We agree with Citron and don’t see Netflix as a low risk slam dunk investment opportunity. We are in a rising interest rate environment and this will eventually trim the excesses in the stock market.