Is Nektar Therapeutics (NKTR) A Good Stock To Buy?

Hedge funds are not perfect. They have their bad picks just like everyone else. Facebook, a stock hedge funds have loved dearly, lost nearly 40% of its value at one point in 2018. Although hedge funds are not perfect, their consensus picks do deliver solid returns, however. Our data show the top 20 S&P 500 stocks among hedge funds beat the S&P 500 Index by more than 6 percentage points so far in 2019. Because hedge funds have a lot of resources and their consensus picks do well, we pay attention to what they think. In this article, we analyze what the elite funds think of Nektar Therapeutics (NASDAQ:NKTR).

Is Nektar Therapeutics (NASDAQ:NKTR) going to take off soon? Hedge funds are getting less bullish. The number of bullish hedge fund positions were trimmed by 3 in recent months. Our calculations also showed that NKTR isn’t among the 30 most popular stocks among hedge funds.

Heading into the second quarter of 2019, a total of 17 of the hedge funds tracked by Insider Monkey were bullish on this stock, a change of -15% from the previous quarter. By comparison, 24 hedge funds held shares or bullish call options in NKTR a year ago. With hedgies’ capital changing hands, there exists a few notable hedge fund managers who were upping their stakes substantially (or already accumulated large positions). 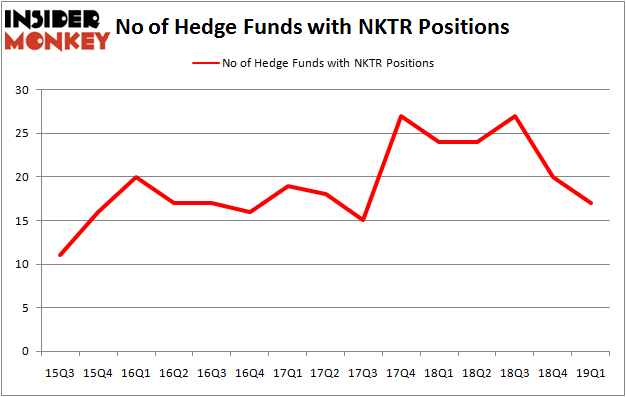 The largest stake in Nektar Therapeutics (NASDAQ:NKTR) was held by Camber Capital Management, which reported holding $67.2 million worth of stock at the end of March. It was followed by Bridger Management with a $41.6 million position. Other investors bullish on the company included AQR Capital Management, D E Shaw, and Cormorant Asset Management.

Judging by the fact that Nektar Therapeutics (NASDAQ:NKTR) has witnessed bearish sentiment from the smart money, it’s easy to see that there was a specific group of fund managers who were dropping their entire stakes last quarter. Intriguingly, Oleg Nodelman’s EcoR1 Capital said goodbye to the biggest position of all the hedgies tracked by Insider Monkey, comprising close to $10.4 million in call options. Bihua Chen’s fund, Cormorant Asset Management, also said goodbye to its call options, about $8.2 million worth. These bearish behaviors are interesting, as total hedge fund interest fell by 3 funds last quarter.

As you can see these stocks had an average of 30.75 hedge funds with bullish positions and the average amount invested in these stocks was $1012 million. That figure was $252 million in NKTR’s case. Caesars Entertainment Corp (NASDAQ:CZR) is the most popular stock in this table. On the other hand BOK Financial Corporation (NASDAQ:BOKF) is the least popular one with only 16 bullish hedge fund positions. Nektar Therapeutics (NASDAQ:NKTR) is not the least popular stock in this group but hedge fund interest is still below average. Our calculations showed that top 20 most popular stocks among hedge funds returned 6.2% in Q2 through June 19th and outperformed the S&P 500 ETF (SPY) by nearly 3 percentage points. A small number of hedge funds were also right about betting on NKTR, though not to the same extent, as the stock returned 5.2% during the same time frame and outperformed the market as well.