We can judge whether Navios Maritime Containers L.P. (NASDAQ:NMCI) is a good investment right now by following the lead of some of the best investors in the world and piggybacking their ideas. There’s no better way to get these firms’ immense resources and analytical capabilities working for us than to follow their lead into their best ideas. While not all of these picks will be winners, our research shows that these picks historically outperformed the market when we factor in known risk factors.

Navios Maritime Containers L.P. (NASDAQ:NMCI) shares haven’t seen a lot of action during the third quarter. Overall, hedge fund sentiment was unchanged. The stock was in 3 hedge funds’ portfolios at the end of the third quarter of 2019. At the end of this article we will also compare NMCI to other stocks including Western Copper and Gold Corporation (NYSE:WRN), USA Truck, Inc. (NASDAQ:USAK), and Internap Corporation (NASDAQ:INAP) to get a better sense of its popularity.

In the financial world there are a lot of signals stock market investors can use to assess their stock investments. A duo of the less known signals are hedge fund and insider trading indicators. Our researchers have shown that, historically, those who follow the top picks of the top fund managers can outperform the broader indices by a significant amount (see the details here).

Unlike the largest US hedge funds that are convinced Dow will soar past 40,000 or the world’s most bearish hedge fund that’s more convinced than ever that a crash is coming, our long-short investment strategy doesn’t rely on bull or bear markets to deliver double digit returns. We only rely on the best performing hedge funds‘ buy/sell signals. We’re going to take a gander at the key hedge fund action regarding Navios Maritime Containers L.P. (NASDAQ:NMCI). 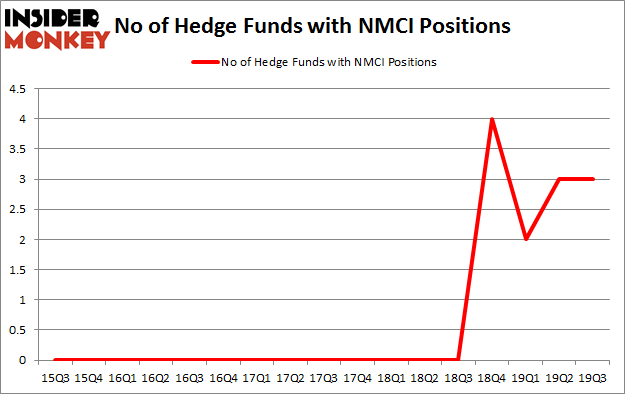 The largest stake in Navios Maritime Containers L.P. (NASDAQ:NMCI) was held by Mangrove Partners, which reported holding $6.6 million worth of stock at the end of September. It was followed by 683 Capital Partners with a $4.4 million position. The only other hedge fund that is bullish on the company was Magnetar Capital.

As you can see these stocks had an average of 5 hedge funds with bullish positions and the average amount invested in these stocks was $6 million. That figure was $11 million in NMCI’s case. Internap Corporation (NASDAQ:INAP) is the most popular stock in this table. On the other hand Newater Technology, Inc. (NASDAQ:NEWA) is the least popular one with only 1 bullish hedge fund positions. Navios Maritime Containers L.P. (NASDAQ:NMCI) is not the least popular stock in this group but hedge fund interest is still below average. This is a slightly negative signal and we’d rather spend our time researching stocks that hedge funds are piling on. Our calculations showed that top 20 most popular stocks among hedge funds returned 34.7% in 2019 through November 22nd and outperformed the S&P 500 ETF (SPY) by 8.5 percentage points. Unfortunately NMCI wasn’t nearly as popular as these 20 stocks (hedge fund sentiment was quite bearish); NMCI investors were disappointed as the stock returned -18.1% during the fourth quarter (through 11/22) and underperformed the market. If you are interested in investing in large cap stocks with huge upside potential, you should check out the top 20 most popular stocks among hedge funds as 70 percent of these stocks already outperformed the market in Q4.