Hedge fund interest in Navigant Consulting, Inc. (NYSE:NCI) shares was flat at the end of last quarter. This is usually a negative indicator. At the end of this article we will also compare NCI to other stocks including Nuveen New York AMT-Free Quality Municipal (NYSE:NRK), PC Connection, Inc. (NASDAQ:CNXN), and PlayAGS, Inc. (NYSE:AGS) to get a better sense of its popularity.

How have hedgies been trading Navigant Consulting, Inc. (NYSE:NCI)?

At the end of the third quarter, a total of 15 of the hedge funds tracked by Insider Monkey were long this stock, no change from the second quarter of 2018. Below, you can check out the change in hedge fund sentiment towards NCI over the last 13 quarters. With hedge funds’ positions undergoing their usual ebb and flow, there exists a few key hedge fund managers who were boosting their stakes considerably (or already accumulated large positions). 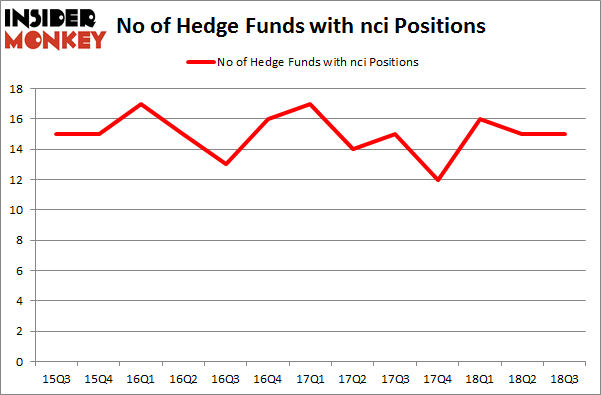 More specifically, Pzena Investment Management was the largest shareholder of Navigant Consulting, Inc. (NYSE:NCI), with a stake worth $39.1 million reported as of the end of September. Trailing Pzena Investment Management was D E Shaw, which amassed a stake valued at $24.6 million. AQR Capital Management, Two Sigma Advisors, and Renaissance Technologies were also very fond of the stock, giving the stock large weights in their portfolios.

Seeing as Navigant Consulting, Inc. (NYSE:NCI) has experienced bearish sentiment from hedge fund managers, we can see that there exists a select few funds who were dropping their entire stakes last quarter. Interestingly, Will Cook’s Sunriver Management cut the biggest investment of the “upper crust” of funds monitored by Insider Monkey, worth close to $12.9 million in stock, and Peter Rathjens, Bruce Clarke and John Campbell’s Arrowstreet Capital was right behind this move, as the fund dumped about $1.5 million worth. These bearish behaviors are interesting, as aggregate hedge fund interest stayed the same (this is a bearish signal in our experience).

As you can see these stocks had an average of 9.75 hedge funds with bullish positions and the average amount invested in these stocks was $80 million. That figure was $90 million in NCI’s case. PlayAGS, Inc. (NYSE:AGS) is the most popular stock in this table. On the other hand Nuveen New York AMT-Free Quality Municipal Income Fund (NYSE:NRK) is the least popular one with only 2 bullish hedge fund positions. Navigant Consulting, Inc. (NYSE:NCI) is not the most popular stock in this group but hedge fund interest is still above average. This is a slightly positive signal but we’d rather spend our time researching stocks that hedge funds are piling on. In this regard AGS might be a better candidate to consider a long position.