Is Navient Corp (NAVI) Going to Burn These Hedge Funds?

The Insider Monkey team has completed processing the quarterly 13F filings for the September quarter submitted by the hedge funds and other money managers included in our extensive database. Most hedge fund investors endured a torrid quarter, which certainly propelled them to adjust their equity holdings so as to maintain the desired risk profile. As a result, the relevancy of these public filings and their content is indisputable, as they may reveal numerous high-potential stocks. The following article will discuss the smart money sentiment towards Navient Corp (NASDAQ:NAVI).

Navient Corp (NASDAQ:NAVI) investors should pay attention to a decrease in activity from the world’s largest hedge funds lately. Our calculations also showed that NAVI isn’t among the 30 most popular stocks among hedge funds.

According to most stock holders, hedge funds are viewed as slow, old investment tools of the past. While there are over 8,000 funds in operation at present, We choose to focus on the crème de la crème of this club, approximately 700 funds. These investment experts have their hands on the majority of the hedge fund industry’s total capital, and by shadowing their finest equity investments, Insider Monkey has determined several investment strategies that have historically outperformed the broader indices. Insider Monkey’s flagship hedge fund strategy defeated the S&P 500 index by 6 percentage points per year since its inception in May 2014 through early November 2018. We were able to generate large returns even by identifying short candidates. Our portfolio of short stocks lost 24% since February 2017 (through December 3rd) even though the market was up nearly 23% during the same period. We just shared a list of 11 short targets in our latest quarterly update. 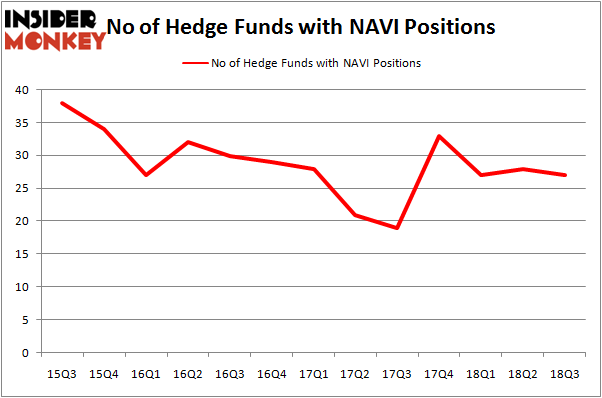 The largest stake in Navient Corp (NASDAQ:NAVI) was held by Canyon Capital Advisors, which reported holding $345.8 million worth of stock at the end of September. It was followed by Carlson Capital with a $59.9 million position. Other investors bullish on the company included D E Shaw, AQR Capital Management, and GLG Partners.

Due to the fact that Navient Corp (NASDAQ:NAVI) has experienced falling interest from hedge fund managers, it’s safe to say that there was a specific group of funds that slashed their full holdings in the third quarter. It’s worth mentioning that William B. Gray’s Orbis Investment Management sold off the largest stake of the 700 funds watched by Insider Monkey, comprising close to $40.3 million in stock. David Rosen’s fund, Rubric Capital Management, also cut its stock, about $8.1 million worth. These moves are intriguing to say the least, as aggregate hedge fund interest was cut by 1 funds in the third quarter.

As you can see these stocks had an average of 19.75 hedge funds with bullish positions and the average amount invested in these stocks was $391 million. That figure was $582 million in NAVI’s case. SM Energy Company (NYSE:SM) is the most popular stock in this table. On the other hand UMB Financial Corporation (NASDAQ:UMBF) is the least popular one with only 11 bullish hedge fund positions. Compared to these stocks Navient Corp (NASDAQ:NAVI) is more popular among hedge funds. Considering that hedge funds are fond of this stock in relation to its market cap peers, it may be a good idea to analyze it in detail and potentially include it in your portfolio.