Most investors tend to think that hedge funds and other asset managers are worthless, as they cannot beat even simple index fund portfolios. In fact, most people expect hedge funds to compete with and outperform the bull market that we have witnessed over the past few years. However, hedge funds are generally partially hedged and aim at delivering attractive risk-adjusted returns rather than following the ups and downs of equity markets hoping that they will outperform the broader market. Our research shows that hedge funds do have great stock picking skills, so let’s take a glance at the smart money sentiment towards National Retail Properties, Inc. (NYSE:NNN).

Hedge fund interest in National Retail Properties, Inc. (NYSE:NNN) shares was flat at the end of last quarter. This is usually a negative indicator. At the end of this article we will also compare NNN to other stocks including PulteGroup, Inc. (NYSE:PHM), Enel Chile S.A. (NYSE:ENIC), and Axalta Coating Systems Ltd (NYSE:AXTA) to get a better sense of its popularity.

At Q3’s end, a total of 11 of the hedge funds tracked by Insider Monkey were long this stock, no change from the previous quarter. The graph below displays the number of hedge funds with bullish position in NNN over the last 13 quarters. With hedge funds’ positions undergoing their usual ebb and flow, there exists an “upper tier” of noteworthy hedge fund managers who were adding to their holdings substantially (or already accumulated large positions). 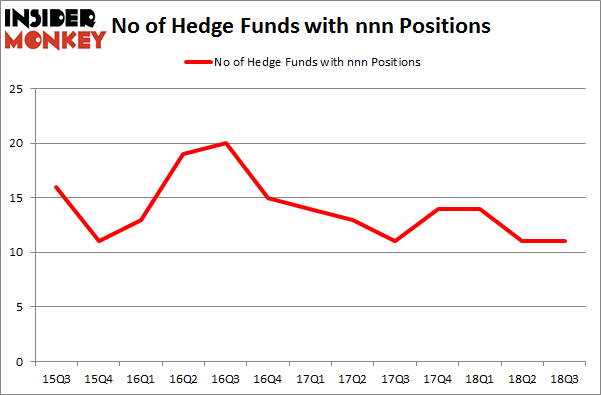 More specifically, Millennium Management was the largest shareholder of National Retail Properties, Inc. (NYSE:NNN), with a stake worth $51.8 million reported as of the end of September. Trailing Millennium Management was AEW Capital Management, which amassed a stake valued at $48.3 million. Fisher Asset Management, Citadel Investment Group, and BlueCrest Capital Mgmt. were also very fond of the stock, giving the stock large weights in their portfolios.

Seeing as National Retail Properties, Inc. (NYSE:NNN) has experienced a decline in interest from the aggregate hedge fund industry, it’s easy to see that there was a specific group of fund managers who were dropping their entire stakes heading into Q3. Interestingly, John Overdeck and David Siegel’s Two Sigma Advisors dropped the largest position of the 700 funds tracked by Insider Monkey, comprising an estimated $4.1 million in stock. Matthew Tewksbury’s fund, Stevens Capital Management, also dropped its stock, about $1.7 million worth. These bearish behaviors are important to note, as aggregate hedge fund interest stayed the same (this is a bearish signal in our experience).

As you can see these stocks had an average of 19.75 hedge funds with bullish positions and the average amount invested in these stocks was $767 million. That figure was $147 million in NNN’s case. Axalta Coating Systems Ltd (NYSE:AXTA) is the most popular stock in this table. On the other hand Enel Chile S.A. (NYSE:ENIC) is the least popular one with only 4 bullish hedge fund positions. National Retail Properties, Inc. (NYSE:NNN) is not the least popular stock in this group but hedge fund interest is still below average. This is a slightly negative signal and we’d rather spend our time researching stocks that hedge funds are piling on. In this regard AXTA might be a better candidate to consider a long position.