At Insider Monkey, we pore over the filings of nearly 750 top investment firms every quarter, a process we have now completed for the latest reporting period. The data we’ve gathered as a result gives us access to a wealth of collective knowledge based on these firms’ portfolio holdings as of March 31. In this article, we will use that wealth of knowledge to determine whether or not National Fuel Gas Company (NYSE:NFG) makes for a good investment right now.

Hedge fund interest in National Fuel Gas Company (NYSE:NFG) shares was flat at the end of last quarter. This is usually a negative indicator. At the end of this article we will also compare NFG to other stocks including Huntsman Corporation (NYSE:HUN), NIO Inc. (NYSE:NIO), and Buckeye Partners, L.P. (NYSE:BPL) to get a better sense of its popularity.

If you’d ask most traders, hedge funds are assumed to be worthless, old financial vehicles of years past. While there are greater than 8000 funds trading at present, Our researchers hone in on the elite of this club, approximately 750 funds. These investment experts handle the lion’s share of the smart money’s total capital, and by tailing their highest performing stock picks, Insider Monkey has figured out a number of investment strategies that have historically defeated Mr. Market. Insider Monkey’s flagship hedge fund strategy outstripped the S&P 500 index by around 5 percentage points per annum since its inception in May 2014 through June 18th. We were able to generate large returns even by identifying short candidates. Our portfolio of short stocks lost 28.2% since February 2017 (through June 18th) even though the market was up nearly 30% during the same period. We just shared a list of 5 short targets in our latest quarterly update and they are already down an average of 8.2% in a month whereas our long picks outperformed the market by 2.5 percentage points in this volatile 5 week period (our long picks also beat the market by 15 percentage points so far this year). 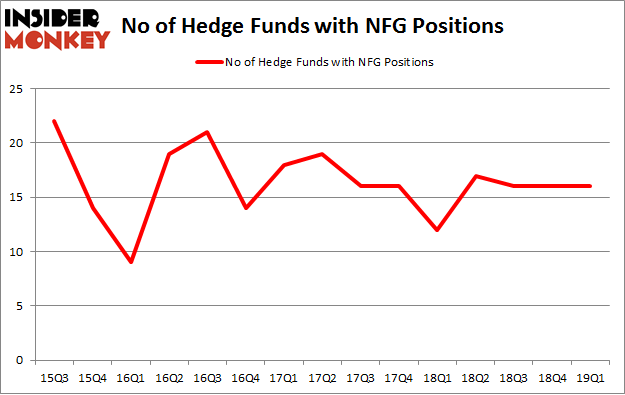 Among these funds, GAMCO Investors held the most valuable stake in National Fuel Gas Company (NYSE:NFG), which was worth $147.7 million at the end of the first quarter. On the second spot was Winton Capital Management which amassed $21.9 million worth of shares. Moreover, Private Capital Management, GLG Partners, and D E Shaw were also bullish on National Fuel Gas Company (NYSE:NFG), allocating a large percentage of their portfolios to this stock.

Because National Fuel Gas Company (NYSE:NFG) has experienced falling interest from the smart money, we can see that there lies a certain “tier” of fund managers that slashed their full holdings last quarter. At the top of the heap, Peter Rathjens, Bruce Clarke and John Campbell’s Arrowstreet Capital said goodbye to the biggest position of the 700 funds followed by Insider Monkey, valued at close to $9.5 million in stock, and Ray Dalio’s Bridgewater Associates was right behind this move, as the fund said goodbye to about $1.5 million worth. These transactions are interesting, as aggregate hedge fund interest stayed the same (this is a bearish signal in our experience).

As you can see these stocks had an average of 23.75 hedge funds with bullish positions and the average amount invested in these stocks was $306 million. That figure was $237 million in NFG’s case. Huntsman Corporation (NYSE:HUN) is the most popular stock in this table. On the other hand Buckeye Partners, L.P. (NYSE:BPL) is the least popular one with only 5 bullish hedge fund positions. National Fuel Gas Company (NYSE:NFG) is not the least popular stock in this group but hedge fund interest is still below average. This is a slightly negative signal and we’d rather spend our time researching stocks that hedge funds are piling on. Our calculations showed that top 20 most popular stocks among hedge funds returned 6.2% in Q2 through June 19th and outperformed the S&P 500 ETF (SPY) by nearly 3 percentage points. Unfortunately NFG wasn’t nearly as popular as these 20 stocks (hedge fund sentiment was quite bearish); NFG investors were disappointed as the stock returned -10.9% during the same time period and underperformed the market. If you are interested in investing in large cap stocks with huge upside potential, you should check out the top 20 most popular stocks among hedge funds as 13 of these stocks already outperformed the market so far in Q2.