Is National Beverage Corp. (FIZZ) A Good Stock To Buy?

National Beverage Corp. (NASDAQ:FIZZ) shares haven’t seen a lot of action during the third quarter. Overall, hedge fund sentiment was unchanged. The stock was in 15 hedge funds’ portfolios at the end of September. At the end of this article we will also compare FIZZ to other stocks including Webster Financial Corporation (NYSE:WBS), CAE, Inc. (NYSE:CAE), and athenahealth, Inc (NASDAQ:ATHN) to get a better sense of its popularity. 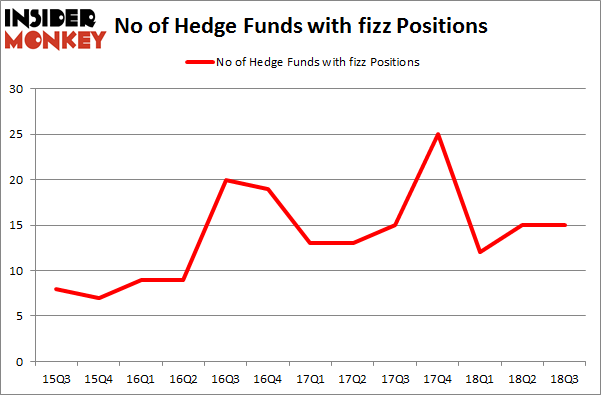 Seeing as National Beverage Corp. (NASDAQ:FIZZ) has witnessed declining sentiment from the entirety of the hedge funds we track, it’s safe to say that there lies a certain “tier” of hedge funds who sold off their entire stakes by the end of the third quarter. Interestingly, Joel Ramin’s 12 West Capital Management said goodbye to the largest position of the 700 funds tracked by Insider Monkey, valued at an estimated $31.8 million in stock. Louis Navellier’s fund, Navellier & Associates, also cut its stock, about $3.9 million worth. These bearish behaviors are intriguing to say the least, as aggregate hedge fund interest stayed the same (this is a bearish signal in our experience).

As you can see these stocks had an average of 24.5 hedge funds with bullish positions and the average amount invested in these stocks was $522 million. That figure was $351 million in FIZZ’s case. Trinity Industries, Inc. (NYSE:TRN) is the most popular stock in this table. On the other hand CAE, Inc. (NYSE:CAE) is the least popular one with only 10 bullish hedge fund positions. National Beverage Corp. (NASDAQ:FIZZ) is not the least popular stock in this group but hedge fund interest is still below average. This is a slightly negative signal and we’d rather spend our time researching stocks that hedge funds are piling on. In this regard TRN might be a better candidate to consider a long position.