Is Motorcar Parts of America, Inc. (NASDAQ:MPAA) a good investment right now? We check hedge fund and billionaire investor sentiment before delving into hours of research. Hedge funds spend millions of dollars on Ivy League graduates, expert networks, and get tips from industry insiders. They sometimes fail miserably but historically their consensus stock picks outperformed the market after adjusting for known risk factors.

Is Motorcar Parts of America, Inc. (NASDAQ:MPAA) a buy, sell, or hold? Money managers are betting on the stock. The number of long hedge fund positions improved by 1 lately. Our calculations also showed that MPAA isn’t among the 30 most popular stocks among hedge funds.

While collecting data for our article, we came across Avenir Capital’s letter for the December 2017 quarter, which has a position in the company. Here is what the letter said regarding the stock:

“Out biggest decliner for the quarter was Motorcar Parts of America (MPAA: NASDAQ) which declined by 15% to end at $24.99. MPAA has gone through several quarters of subdued growth which has led to some skepticism towards management goals. We believe that the company’s market position has in fact strengthened through recent market share gains and industry consolidation and that the short-term softness in revenue is just that, short term. There has been no deterioration in either the industry or MPAA’s competitive position within the industry and the company is well positioned to continue its revenue growth which has averaged 19% per annum over the past four years. The company remains very attractively priced at current levels and we recently added to our position.”

What does the smart money think about Motorcar Parts of America, Inc. (NASDAQ:MPAA)? 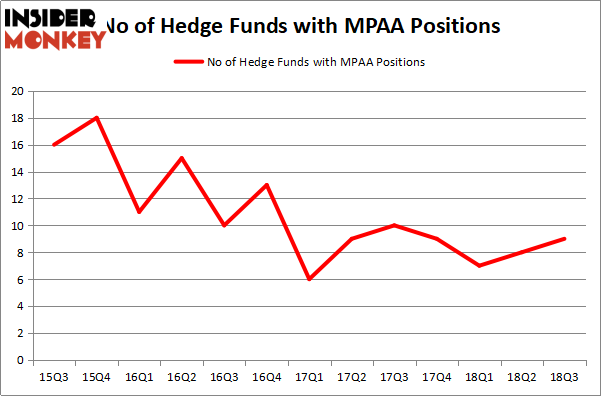 As aggregate interest increased, specific money managers were leading the bulls’ herd. Millennium Management, managed by Israel Englander, established the most valuable position in Motorcar Parts of America, Inc. (NASDAQ:MPAA). Millennium Management had $1.4 million invested in the company at the end of the quarter. Roger Ibbotson’s Zebra Capital Management also initiated a $0.2 million position during the quarter.

As you can see these stocks had an average of 10.5 hedge funds with bullish positions and the average amount invested in these stocks was $44 million. That figure was $89 million in MPAA’s case. A10 Networks Inc (NYSE:ATEN) is the most popular stock in this table. On the other hand MFS Intermediate Income Trust (NYSE:MIN) is the least popular one with only 2 bullish hedge fund positions. Motorcar Parts of America, Inc. (NASDAQ:MPAA) is not the least popular stock in this group but hedge fund interest is still below average. This is a slightly negative signal and we’d rather spend our time researching stocks that hedge funds are piling on. In this regard ATEN might be a better candidate to consider a long position.

Here is What Hedge Funds Think About Movado Group, Inc (MOV)
Monthly Newsletter Strategy
Download a free copy of our newsletter and see the details inside!
Hedge Fund Resource Center
Related News
Is Motorcar Parts of America, Inc. (MPAA) Going to Burn These Hedge Funds? Motorcar Parts of America, Inc. (MPAA): Insiders Are Buying, Should You? The 10 Best Islands to Visit in 2019 5 Most Socially Responsible Companies in America 5 Ways You Can Eliminate Credit Card Debt
Billionaire Hedge Funds