Is Moody’s Corporation (MCO) A Good Stock To Buy?

Moody’s Corporation (NYSE:MCO) has experienced an increase in activity from the world’s largest hedge funds lately. Our calculations also showed that mco isn’t among the 30 most popular stocks among hedge funds. 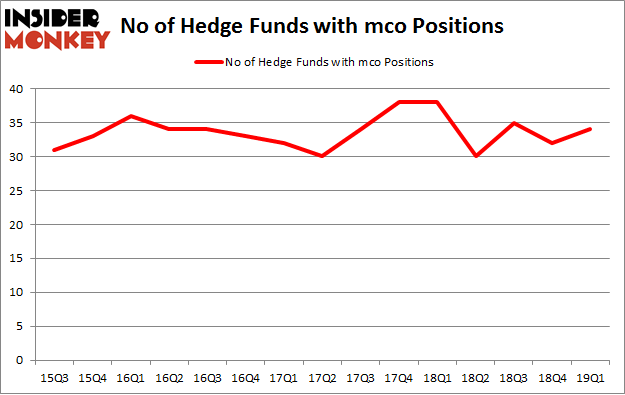 The largest stake in Moody’s Corporation (NYSE:MCO) was held by Berkshire Hathaway, which reported holding $4467.5 million worth of stock at the end of March. It was followed by Akre Capital Management with a $1029 million position. Other investors bullish on the company included Windacre Partnership, AltaRock Partners, and Cantillon Capital Management.

As industrywide interest jumped, specific money managers have been driving this bullishness. Holocene Advisors, managed by Brandon Haley, initiated the biggest position in Moody’s Corporation (NYSE:MCO). Holocene Advisors had $17.7 million invested in the company at the end of the quarter. Andrew Sandler’s Sandler Capital Management also made a $13 million investment in the stock during the quarter. The other funds with brand new MCO positions are Jeffrey Talpins’s Element Capital Management, David Rodriguez-Fraile’s BlueMar Capital Management, and Roy Vermus and Shlomi Bracha’s Noked Capital.

As you can see these stocks had an average of 46.75 hedge funds with bullish positions and the average amount invested in these stocks was $2641 million. That figure was $6446 million in MCO’s case. Worldpay, Inc. (NYSE:WP) is the most popular stock in this table. On the other hand Johnson Controls International plc (NYSE:JCI) is the least popular one with only 25 bullish hedge fund positions. Moody’s Corporation (NYSE:MCO) is not the least popular stock in this group but hedge fund interest is still below average. Our calculations showed that top 20 most popular stocks among hedge funds returned 1.9% in Q2 through May 30th and outperformed the S&P 500 ETF (SPY) by more than 3 percentage points. A small number of hedge funds were also right about betting on MCO as the stock returned 3.7% during the same time frame and outperformed the market by an even larger margin.