Is Molina Healthcare, Inc. (MOH) A Good Stock To Buy?

There are several ways to beat the market, and investing in small cap stocks has historically been one of them. We like to improve the odds of beating the market further by examining what famous hedge fund operators such as Carl Icahn and George Soros think. Those hedge fund operators make billions of dollars each year by hiring the best and the brightest to do research on stocks, including small cap stocks that big brokerage houses simply don’t cover. Because of Carl Icahn and other elite funds’ exemplary historical records, we pay attention to their small cap picks. In this article, we use hedge fund filing data to analyze Molina Healthcare, Inc. (NYSE:MOH).

Is Molina Healthcare, Inc. (NYSE:MOH) going to take off soon? Hedge funds are turning bullish. The number of bullish hedge fund bets went up by 1 in recent months. Our calculations also showed that MOH isn’t among the 30 most popular stocks among hedge funds.

To most shareholders, hedge funds are assumed to be unimportant, outdated financial vehicles of years past. While there are more than 8,000 funds in operation at the moment, Our researchers look at the aristocrats of this group, approximately 700 funds. These money managers oversee the majority of all hedge funds’ total capital, and by watching their matchless equity investments, Insider Monkey has revealed many investment strategies that have historically defeated Mr. Market. Insider Monkey’s flagship hedge fund strategy beat the S&P 500 index by 6 percentage points per year since its inception in May 2014 through early November 2018. We were able to generate large returns even by identifying short candidates. Our portfolio of short stocks lost 24% since February 2017 (through December 3rd) even though the market was up nearly 23% during the same period. We just shared a list of 11 short targets in our latest quarterly update.

How have hedgies been trading Molina Healthcare, Inc. (NYSE:MOH)? 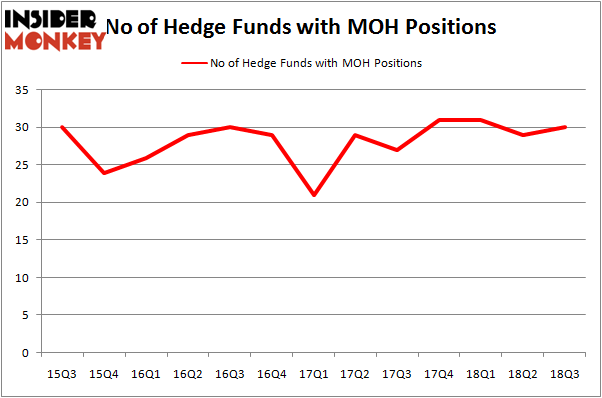 More specifically, Renaissance Technologies was the largest shareholder of Molina Healthcare, Inc. (NYSE:MOH), with a stake worth $556 million reported as of the end of September. Trailing Renaissance Technologies was Two Sigma Advisors, which amassed a stake valued at $153.9 million. Iridian Asset Management, Millennium Management, and AQR Capital Management were also very fond of the stock, giving the stock large weights in their portfolios.

Now, specific money managers were breaking ground themselves. OrbiMed Advisors, managed by Samuel Isaly, established the most valuable position in Molina Healthcare, Inc. (NYSE:MOH). OrbiMed Advisors had $72.7 million invested in the company at the end of the quarter. Lee Ainslie’s Maverick Capital also made a $10.5 million investment in the stock during the quarter. The following funds were also among the new MOH investors: Brad Farber’s Atika Capital, Israel Englander’s Millennium Management, and George Zweig, Shane Haas and Ravi Chander’s Signition LP.

As you can see these stocks had an average of 22.75 hedge funds with bullish positions and the average amount invested in these stocks was $455 million. That figure was $1.52 billion in MOH’s case. A. O. Smith Corporation (NYSE:AOS) is the most popular stock in this table. On the other hand West Pharmaceutical Services Inc. (NYSE:WST) is the least popular one with only 17 bullish hedge fund positions. Molina Healthcare, Inc. (NYSE:MOH) is not the most popular stock in this group but hedge fund interest is still above average. This is a slightly positive signal but we’d rather spend our time researching stocks that hedge funds are piling on. In this regard AOS might be a better candidate to consider a long position.

Should You Buy Kohl’s Corporation (KSS)?
Monthly Newsletter Strategy
Download a free copy of our newsletter and see the details inside!
Hedge Fund Resource Center
Related News
11 Best Insurance Companies to Invest in 2017 10 Biggest HMOs in USA Should You Buy Molina Healthcare, Inc. (MOH)? 5 Stocks Ripe For Activist Takeovers Performance Of The Enterprise Multiple Portfolio Groupon, Golar, and Western Digital Among 5 Stocks Getting Crushed Today Healthcare Investor Sam Isaly Was Wrong About These 2 Stocks; Makes a Lot of Money on Freshly-Acquired Insurer The 10 Best Islands to Visit in 2019 5 Most Socially Responsible Companies in America 5 Ways You Can Eliminate Credit Card Debt
Billionaire Hedge Funds