Hedge Funds and other institutional investors have just completed filing their 13Fs with the Securities and Exchange Commission, revealing their equity portfolios as of the end of September. At Insider Monkey, we follow over 700 of the best-performing investors and by analyzing their 13F filings, we can determine the stocks that they are collectively bullish on. One of their picks is Mohawk Industries, Inc. (NYSE:MHK), so let’s take a closer look at the sentiment that surrounds it in the current quarter.

Is Mohawk Industries, Inc. (NYSE:MHK) ready to rally soon? The smart money is taking a bullish view. The number of long hedge fund bets increased by 3 lately. However, our calculations also showed that MHK isn’t among the 30 most popular stocks among hedge funds but this isn’t too uncommon for smaller stocks.
Today there are a large number of gauges stock traders employ to size up publicly traded companies. A couple of the most underrated gauges are hedge fund and insider trading activity. Our researchers have shown that, historically, those who follow the best picks of the top hedge fund managers can trounce the market by a healthy amount (see the details here).

What have hedge funds been doing with Mohawk Industries, Inc. (NYSE:MHK)?

At Q3’s end, a total of 49 of the hedge funds tracked by Insider Monkey held long positions in this stock, a change of 7% from one quarter earlier. On the other hand, there were a total of 52 hedge funds with a bullish position in MHK at the beginning of this year. With the smart money’s sentiment swirling, there exists a few notable hedge fund managers who were upping their stakes significantly (or already accumulated large positions). 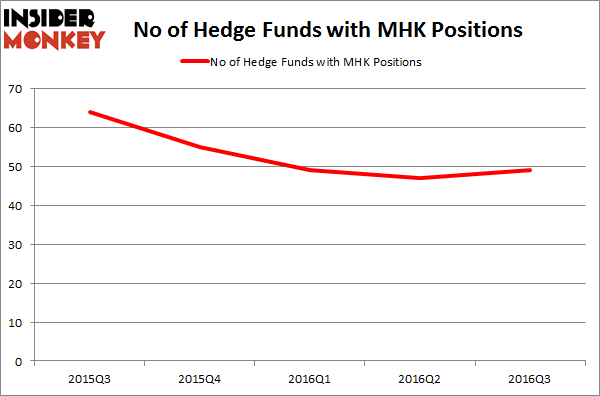 The largest stake in Mohawk Industries, Inc. (NYSE:MHK) was held by Eagle Capital Management, which reported holding $679.7 million worth of stock at the end of September. It was followed by First Pacific Advisors LLC with a $277.1 million position. Other investors bullish on the company included Soroban Capital Partners, Soroban Capital Partners, and Corvex Capital.

As one would reasonably expect, key money managers were breaking ground themselves. First Pacific Advisors LLC, managed by Robert Rodriguez and Steven Romick, created the most valuable position in Mohawk Industries, Inc. (NYSE:MHK). First Pacific Advisors LLC had $277.1 million invested in the company at the end of the quarter. Eric W. Mandelblatt and Gaurav Kapadia’s Soroban Capital Partners also initiated a $175.4 million position during the quarter. The other funds with new positions in the stock are John Khoury’s Long Pond Capital, Jorge Paulo Lemann’s 3G Capital, and Sander Gerber’s Hudson Bay Capital Management.

As you can see these stocks had an average of 25 hedge funds with bullish positions and the average amount invested in these stocks was $1.24 billion. That figure was $2.51 billion in MHK’s case. Alliance Data Systems Corporation (NYSE:ADS) is the most popular stock in this table. On the other hand ZTO Express (Cayman) Inc. (NYSE:ZTO) is the least popular one with only 12 bullish hedge fund positions. Compared to these stocks Mohawk Industries, Inc. (NYSE:MHK) is more popular among hedge funds. Considering that hedge funds are fond of this stock in relation to its market cap peers, it may be a good idea to analyze it in detail and potentially include it in your portfolio.
Disclosure: None. This article was originally published at Insider Monkey.

Hedge Funds Were 350% Overweight This Stock Right Before It Doubled