Is Micron Technology, Inc. (MU) A Good Stock To Buy?

Micron Technology, Inc. (NASDAQ:MU) investors should be aware of a decrease in support from the world’s most elite money managers of late. MU was in 59 hedge funds’ portfolios at the end of the third quarter of 2018. There were 66 hedge funds in our database with MU positions at the end of the previous quarter. Despite the increase in interest, the company wasn’t one of the 30 most popular stocks among hedge funds.

If you’d ask most shareholders, hedge funds are perceived as slow, old financial tools of years past. While there are greater than 8000 funds in operation today, Our researchers look at the elite of this club, approximately 700 funds. It is estimated that this group of investors handle most of all hedge funds’ total asset base, and by monitoring their first-class picks, Insider Monkey has discovered various investment strategies that have historically exceeded the broader indices. Insider Monkey’s flagship hedge fund strategy outrun the S&P 500 index by 6 percentage points per year since its inception in May 2014 through early November 2018. We were able to generate large returns even by identifying short candidates. Our portfolio of short stocks lost 26.1% since February 2017 even though the market was up nearly 19% during the same period. We just shared a list of 11 short targets in our latest quarterly update.

While collecting data on the company, we came across a letter from Dane Capital Management Fund, detailing its returns from the 4th quarter of 2017. Dane Capital has a position in the company. Here is what it had to say in the report:

Shares of Micron returned 87% on the year. As a former semiconductor analyst that covered Micron we believe that while Micron is a widely-followed stock, we possess unique perspective. We believe the costliness and limited ROI of new FABs will curtail capacity additions, which have historically crushed cycles. Micron is likely to earn $9-$10 in 2018, meaning it’s trading at 4-5x EPS. If we’re wrong, we simply don’t see as harsh a cycle as we have in the past. The diversity of end markets is far broader, and we can see moderate, but not excessive capacity growth. If the trough of the cycle is $4-$5 per share, we don’t see a lot of downside. In the interim, we see plenty of room for multiple expansion. 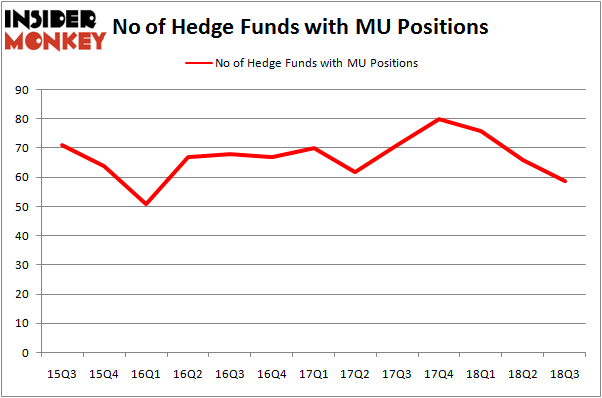 More specifically, Appaloosa Management LP was the largest shareholder of Micron Technology, Inc. (NASDAQ:MU), with a stake worth $1628.3 million reported as of the end of September. Trailing Appaloosa Management LP was AQR Capital Management, which amassed a stake valued at $860.7 million. Water Street Capital, Citadel Investment Group, and Citadel Investment Group were also very fond of the stock, giving the stock large weights in their portfolios.

Due to the fact that Micron Technology, Inc. (NASDAQ:MU) has witnessed a decline in interest from the entirety of the hedge funds we track, logic holds that there lies a certain “tier” of money managers that elected to cut their full holdings heading into Q3. It’s worth mentioning that Steve Cohen’s Point72 Asset Management sold off the biggest investment of the “upper crust” of funds followed by Insider Monkey, comprising an estimated $106.3 million in call options, and Joe DiMenna’s ZWEIG DIMENNA PARTNERS was right behind this move, as the fund said goodbye to about $49.3 million worth. These transactions are important to note, as total hedge fund interest dropped by 7 funds heading into Q3.

As you can see these stocks had an average of 47.75 hedge funds with bullish positions and the average amount invested in these stocks was $3611 million. That figure was $4084 million in MU’s case. CIGNA Corporation (NYSE:CI) is the most popular stock in this table. On the other hand The Bank of New York Mellon Corporation (NYSE:BK) is the least popular one with only 39 bullish hedge fund positions. Micron Technology, Inc. (NASDAQ:MU) is not the most popular stock in this group but hedge fund interest is still above average. This is a slightly positive signal but we’d rather spend our time researching stocks that hedge funds are piling on. In this regard CI might be a better candidate to consider a long position.