How do we determine whether M/I Homes Inc (NYSE:MHO) makes for a good investment at the moment? We analyze the sentiment of a select group of the very best investors in the world, who spend immense amounts of time and resources studying companies. They may not always be right (no one is), but data shows that their consensus long positions have historically outperformed the market when we adjust for known risk factors.

Is M/I Homes Inc (NYSE:MHO) worth your attention right now? The best stock pickers are betting on the stock. The number of bullish hedge fund bets inched up by 1 recently. Our calculations also showed that MHO isn’t among the 30 most popular stocks among hedge funds. MHO was in 14 hedge funds’ portfolios at the end of September. There were 13 hedge funds in our database with MHO holdings at the end of the previous quarter.

Heading into the fourth quarter of 2018, a total of 14 of the hedge funds tracked by Insider Monkey were long this stock, a change of 8% from the previous quarter. On the other hand, there were a total of 14 hedge funds with a bullish position in MHO at the beginning of this year. With the smart money’s sentiment swirling, there exists an “upper tier” of noteworthy hedge fund managers who were increasing their holdings considerably (or already accumulated large positions). 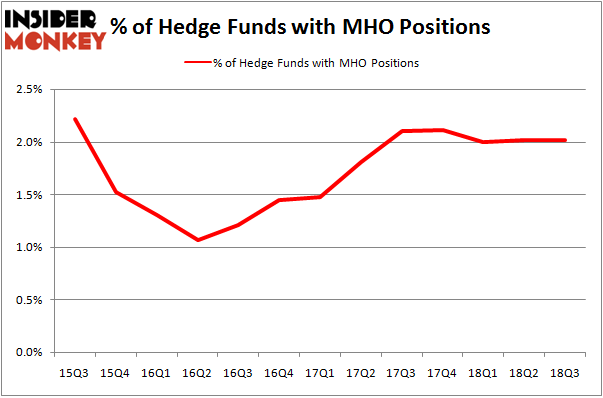 Among these funds, Millennium Management held the most valuable stake in M/I Homes Inc (NYSE:MHO), which was worth $26.2 million at the end of the third quarter. On the second spot was Citadel Investment Group which amassed $13 million worth of shares. Moreover, Basswood Capital, Gratia Capital, and Royce & Associates were also bullish on M/I Homes Inc (NYSE:MHO), allocating a large percentage of their portfolios to this stock.

With a general bullishness amongst the heavyweights, key money managers were leading the bulls’ herd. Zebra Capital Management, managed by Roger Ibbotson, created the most valuable position in M/I Homes Inc (NYSE:MHO). Zebra Capital Management had $0.5 million invested in the company at the end of the quarter. Gavin Saitowitz and Cisco J. del Valle’s Springbok Capital also initiated a $0 million position during the quarter.

As you can see these stocks had an average of 8.5 hedge funds with bullish positions and the average amount invested in these stocks was $52 million. That figure was $91 million in MHO’s case. Petmed Express Inc (NASDAQ:PETS) is the most popular stock in this table. On the other hand Urstadt Biddle Properties Inc. (NYSE:UBP) is the least popular one with only 2 bullish hedge fund positions. M/I Homes Inc (NYSE:MHO) is not the most popular stock in this group but hedge fund interest is still above average. This is a slightly positive signal but we’d rather spend our time researching stocks that hedge funds are piling on. In this regard PETS might be a better candidate to consider a long position.