Is MGE Energy, Inc. (MGEE) A Good Stock To Buy?

Out of thousands of stocks that are currently traded on the market, it is difficult to determine those that can really generate strong returns. Hedge funds and institutional investors spend millions of dollars on analysts with MBAs and PhDs, who are industry experts and well connected to other industry and media insiders on top of that. Individual investors can piggyback the hedge funds employing these talents and can benefit from their vast resources and knowledge in that way. We analyze quarterly 13F filings of over 700 hedge funds and, by looking at the smart money sentiment that surrounds a stock, we can determine whether it has the potential to beat the market over the long-term. Therefore, let’s take a closer look at what smart money thinks about MGE Energy, Inc. (NASDAQ:MGEE).

MGE Energy, Inc. shares haven’t seen a lot of action during the third quarter. Overall, hedge fund sentiment was unchanged. The stock was in 8 hedge funds’ portfolios at the end of September. The level and the change in hedge fund popularity aren’t the only variables you need to analyze to decipher hedge funds’ perspectives. A stock may witness a boost in popularity but it may still be less popular than similarly priced stocks. That’s why at the end of this article we will examine companies such as Sally Beauty Holdings, Inc. (NYSE:SBH), SPX FLOW, Inc. (NASDAQ:FLOW), and The Medicines Company (NASDAQ:MDCO) to gather more data points.

Our readers will be interested to know that director James G. Berbee was responsible for the last major insider transaction of the company’s common stock, snapping up 142 shares at $63.32 earlier in the year. The shares currently trade at $66.66, so the purchase was certainly a lucrative one for the company.

What have hedge funds been doing with MGE Energy, Inc. (NASDAQ:MGEE)?

At Q3’s end, a total of 8 of the hedge funds tracked by Insider Monkey were long this stock, representing no change from the second quarter of 2018. Below, you can check out the change in hedge fund sentiment towards MGEE over the last 13 quarters. With the smart money’s positions undergoing their usual ebb and flow, there exists an “upper tier” of notable hedge fund managers who were adding to their stakes meaningfully (or already accumulated large positions). 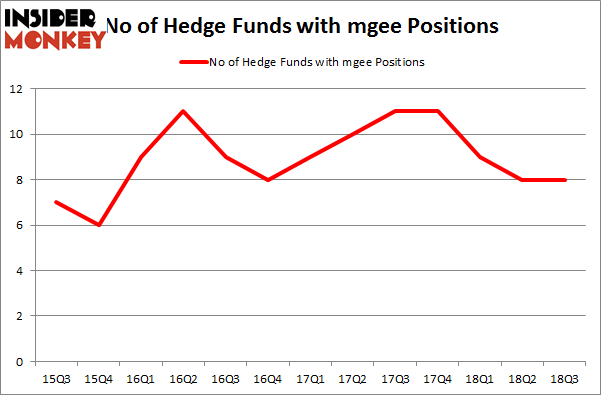 When looking at the institutional investors followed by Insider Monkey, Renaissance Technologies, managed by Jim Simons, holds the most valuable position in MGE Energy, Inc. (NASDAQ:MGEE). Renaissance Technologies has a $25.7 million position in the stock, comprising less than 0.1%% of its 13F portfolio. Sitting at the No. 2 spot is Citadel Investment Group, managed by Ken Griffin, which holds a $1.6 million position; the fund has less than 0.1%% of its 13F portfolio invested in the stock. Other professional money managers that are bullish encompass D. E. Shaw’s D E Shaw, Cliff Asness’ AQR Capital Management and Andrew Feldstein and Stephen Siderow’s Blue Mountain Capital.

As you can see these stocks had an average of 17.75 hedge funds with bullish positions and the average amount invested in these stocks was $279 million. That figure was $33 million in MGEE’s case. The Medicines Company (NASDAQ:MDCO) is the most popular stock in this table. On the other hand SPX FLOW, Inc. (NYSE:FLOW) is the least popular one with only 13 bullish hedge fund positions. Compared to these stocks MGE Energy, Inc. (NASDAQ:MGEE) is even less popular than FLOW. Considering that hedge funds aren’t fond of this stock in relation to other companies analyzed in this article, it may be a good idea to analyze it in detail and understand why the smart money isn’t behind this stock. This isn’t necessarily bad news. Although it is possible that hedge funds may think the stock is overpriced and view the stock as a short candidate, they may not be very familiar with the bullish thesis. In either case more research is warranted.