In this article you are going to find out whether hedge funds think Metropolitan Bank Holding Corp. (NYSE:MCB) is a good investment right now. We like to check what the smart money thinks first before doing extensive research on a given stock. Although there have been several high profile failed hedge fund picks, the consensus picks among hedge fund investors have historically outperformed the market after adjusting for known risk attributes. It’s not surprising given that hedge funds have access to better information and more resources to predict the winners in the stock market.

Metropolitan Bank Holding Corp. (NYSE:MCB) shares haven’t seen a lot of action during the first quarter. Overall, hedge fund sentiment was unchanged. The stock was in 7 hedge funds’ portfolios at the end of the first quarter of 2020. The level and the change in hedge fund popularity aren’t the only variables you need to analyze to decipher hedge funds’ perspectives. A stock may witness a boost in popularity but it may still be less popular than similarly priced stocks. That’s why at the end of this article we will examine companies such as Playa Hotels & Resorts N.V. (NASDAQ:PLYA), BBX Capital Corporation (NYSE:BBX), and NextDecade Corporation (NASDAQ:NEXT) to gather more data points. Our calculations also showed that MCB isn’t among the 30 most popular stocks among hedge funds (click for Q1 rankings and see the video for a quick look at the top 5 stocks).

At Insider Monkey we leave no stone unturned when looking for the next great investment idea. For example, 2020’s unprecedented market conditions provide us with the highest number of trading opportunities in a decade. So we are checking out stocks recommended/scorned by legendary Bill Miller. We interview hedge fund managers and ask them about their best ideas. If you want to find out the best healthcare stock to buy right now, you can watch our latest hedge fund manager interview here. We read hedge fund investor letters and listen to stock pitches at hedge fund conferences. Our best call in 2020 was shorting the market when the S&P 500 was trading at 3150 after realizing the coronavirus pandemic’s significance before most investors. Now let’s take a gander at the fresh hedge fund action surrounding Metropolitan Bank Holding Corp. (NYSE:MCB).

What have hedge funds been doing with Metropolitan Bank Holding Corp. (NYSE:MCB)?

At the end of the first quarter, a total of 7 of the hedge funds tracked by Insider Monkey were bullish on this stock, a change of 0% from the fourth quarter of 2019. By comparison, 8 hedge funds held shares or bullish call options in MCB a year ago. With the smart money’s sentiment swirling, there exists a few notable hedge fund managers who were boosting their stakes significantly (or already accumulated large positions). 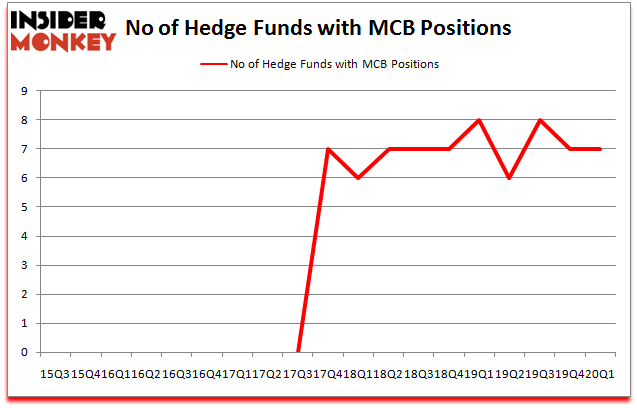 According to Insider Monkey’s hedge fund database, Basswood Capital, managed by Matthew Lindenbaum, holds the largest position in Metropolitan Bank Holding Corp. (NYSE:MCB). Basswood Capital has a $10.5 million position in the stock, comprising 1.2% of its 13F portfolio. Coming in second is EJF Capital, managed by Emanuel J. Friedman, which holds a $7.3 million position; the fund has 1.5% of its 13F portfolio invested in the stock. Remaining peers that hold long positions comprise Renaissance Technologies, John Overdeck and David Siegel’s Two Sigma Advisors and Peter Rathjens, Bruce Clarke and John Campbell’s Arrowstreet Capital. In terms of the portfolio weights assigned to each position EJF Capital allocated the biggest weight to Metropolitan Bank Holding Corp. (NYSE:MCB), around 1.55% of its 13F portfolio. Basswood Capital is also relatively very bullish on the stock, dishing out 1.23 percent of its 13F equity portfolio to MCB.

Since Metropolitan Bank Holding Corp. (NYSE:MCB) has faced declining sentiment from hedge fund managers, it’s safe to say that there lies a certain “tier” of hedge funds that slashed their positions entirely by the end of the first quarter. At the top of the heap, Robert I. Usdan and Wayne K. Goldstein’s Endicott Management cut the largest investment of all the hedgies tracked by Insider Monkey, totaling close to $31.2 million in stock. D. E. Shaw’s fund, D E Shaw, also sold off its stock, about $0.4 million worth. These bearish behaviors are interesting, as total hedge fund interest stayed the same (this is a bearish signal in our experience).

As you can see these stocks had an average of 8 hedge funds with bullish positions and the average amount invested in these stocks was $72 million. That figure was $23 million in MCB’s case. Playa Hotels & Resorts N.V. (NASDAQ:PLYA) is the most popular stock in this table. On the other hand Delek Logistics Partners LP (NYSE:DKL) is the least popular one with only 1 bullish hedge fund positions. Metropolitan Bank Holding Corp. (NYSE:MCB) is not the least popular stock in this group but hedge fund interest is still below average. This is a slightly negative signal and we’d rather spend our time researching stocks that hedge funds are piling on. Our calculations showed that top 10 most popular stocks among hedge funds returned 41.4% in 2019 and outperformed the S&P 500 ETF (SPY) by 10.1 percentage points. These stocks gained 13.9% in 2020 through June 10th and surpassed the market by 14.2 percentage points. Unfortunately MCB wasn’t nearly as popular as these 10 stocks (hedge fund sentiment was quite bearish); MCB investors were disappointed as the stock returned 21.1% during the second quarter and underperformed the market. If you are interested in investing in large cap stocks with huge upside potential, you should check out the top 10 most popular stocks among hedge funds as most of these stocks already outperformed the market in 2020.