Is Marcus & Millichap Inc (MMI) A Good Stock To Buy?

There are several ways to beat the market, and investing in small cap stocks has historically been one of them. We like to improve the odds of beating the market further by examining what famous hedge fund operators such as Carl Icahn and George Soros think. Those hedge fund operators make billions of dollars each year by hiring the best and the brightest to do research on stocks, including small cap stocks that big brokerage houses simply don’t cover. Because of Carl Icahn and other elite funds’ exemplary historical records, we pay attention to their small cap picks. In this article, we use hedge fund filing data to analyze Marcus & Millichap Inc (NYSE:MMI).

Hedge fund interest in Marcus & Millichap Inc (NYSE:MMI) shares was flat at the end of last quarter. This is usually a negative indicator. At the end of this article we will also compare MMI to other stocks including Methode Electronics Inc. (NYSE:MEI), Nevsun Resources (NYSEAMEX:NSU), and Standex Int’l Corp. (NYSE:SXI) to get a better sense of its popularity.

Today there are many gauges market participants put to use to evaluate stocks. A duo of the best gauges are hedge fund and insider trading sentiment. We have shown that, historically, those who follow the best picks of the elite money managers can outperform the broader indices by a solid margin (see the details here).

What does the smart money think about Marcus & Millichap Inc (NYSE:MMI)?

Heading into the fourth quarter of 2018, a total of 15 of the hedge funds tracked by Insider Monkey were bullish on this stock, no change from the previous quarter. By comparison, 14 hedge funds held shares or bullish call options in MMI heading into this year. With the smart money’s capital changing hands, there exists an “upper tier” of key hedge fund managers who were adding to their stakes significantly (or already accumulated large positions). 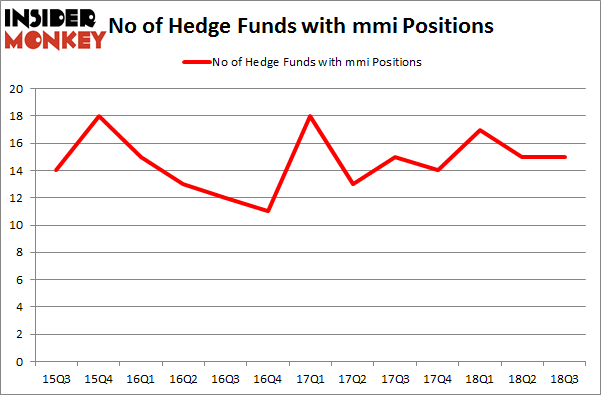 According to publicly available hedge fund and institutional investor holdings data compiled by Insider Monkey, Royce & Associates, managed by Chuck Royce, holds the number one position in Marcus & Millichap Inc (NYSE:MMI). Royce & Associates has a $102.2 million position in the stock, comprising 0.7% of its 13F portfolio. The second most bullish fund manager is Renaissance Technologies, managed by Jim Simons, which holds a $9.9 million position; the fund has less than 0.1%% of its 13F portfolio invested in the stock. Some other professional money managers that are bullish include John Overdeck and David Siegel’s Two Sigma Advisors, Israel Englander’s Millennium Management and Eric Sprott’s Sprott Asset Management.

We view hedge fund activity in the stock unfavorable, but in this case there was only a single hedge fund selling its entire position: Ellington. One hedge fund selling its entire position doesn’t always imply a bearish intent. Theoretically a hedge fund may decide to sell a promising position in order to invest the proceeds in a more promising idea. However, we don’t think this is the case in this case because only one of the 800+ hedge funds tracked by Insider Monkey identified as a viable investment and initiated a position in the stock (that fund was Citadel Investment Group).

As you can see these stocks had an average of 13.75 hedge funds with bullish positions and the average amount invested in these stocks was $137 million. That figure was $139 million in MMI’s case. W&T Offshore, Inc. (NYSE:WTI) is the most popular stock in this table. On the other hand Methode Electronics Inc. (NYSE:MEI) is the least popular one with only 11 bullish hedge fund positions. Marcus & Millichap Inc (NYSE:MMI) is not the most popular stock in this group but hedge fund interest is still above average. This is a slightly positive signal but we’d rather spend our time researching stocks that hedge funds are piling on. In this regard WTI might be a better candidate to consider a long position.