Is Malibu Boats Inc (MBUU) A Good Stock To Buy?

Hedge funds and large money managers usually invest with a focus on the long-term horizon and, therefore, short-lived dips on the charts, usually don’t make them change their opinion towards a company. This time it may be different. During the first 6 weeks of the fourth quarter we observed increased volatility and small-cap stocks underperformed the market. Hedge fund investor letters indicated that they are cutting their overall exposure, closing out some position and doubling down on others. Let’s take a look at the hedge fund sentiment towards Malibu Boats Inc (NASDAQ:MBUU) to find out whether it was one of their high conviction long-term ideas.

Is Malibu Boats Inc (NASDAQ:MBUU) a buy, sell, or hold? Prominent investors are taking a pessimistic view. The number of long hedge fund bets were cut by 1 in recent months. Our calculations also showed that MBUU isn’t among the 30 most popular stocks among hedge funds. MBUU was in 18 hedge funds’ portfolios at the end of September. There were 19 hedge funds in our database with MBUU holdings at the end of the previous quarter.

At the moment there are a lot of tools shareholders have at their disposal to size up their stock investments. Some of the less known tools are hedge fund and insider trading sentiment. Our experts have shown that, historically, those who follow the best picks of the best hedge fund managers can outpace the broader indices by a solid margin (see the details here).

How have hedgies been trading Malibu Boats Inc (NASDAQ:MBUU)? 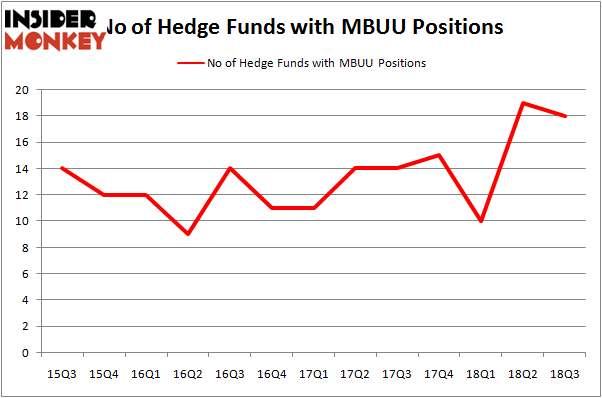 Among these funds, Renaissance Technologies held the most valuable stake in Malibu Boats Inc (NASDAQ:MBUU), which was worth $44.1 million at the end of the third quarter. On the second spot was Driehaus Capital which amassed $28.9 million worth of shares. Moreover, Marshall Wace LLP, Two Sigma Advisors, and Columbus Circle Investors were also bullish on Malibu Boats Inc (NASDAQ:MBUU), allocating a large percentage of their portfolios to this stock.

Since Malibu Boats Inc (NASDAQ:MBUU) has faced falling interest from hedge fund managers, it’s easy to see that there was a specific group of fund managers that slashed their full holdings by the end of the third quarter. Interestingly, Dmitry Balyasny’s Balyasny Asset Management cut the largest stake of all the hedgies monitored by Insider Monkey, valued at close to $0.2 million in stock. Gavin Saitowitz and Cisco J. del Valle’s fund, Springbok Capital, also said goodbye to its stock, about $0 million worth. These bearish behaviors are interesting, as aggregate hedge fund interest dropped by 1 funds by the end of the third quarter.

As you can see these stocks had an average of 19.5 hedge funds with bullish positions and the average amount invested in these stocks was $120 million. That figure was $145 million in MBUU’s case. Infinera Corp. (NASDAQ:INFN) is the most popular stock in this table. On the other hand Government Properties Income Trust (NASDAQ:GOV) is the least popular one with only 15 bullish hedge fund positions. Malibu Boats Inc (NASDAQ:MBUU) is not the least popular stock in this group but hedge fund interest is still below average. This is a slightly negative signal and we’d rather spend our time researching stocks that hedge funds are piling on. In this regard INFN might be a better candidate to consider a long position.

Should You Buy The Cooper Companies, Inc. (COO)?
Monthly Newsletter Strategy
Download a free copy of our newsletter and see the details inside!
Hedge Fund Resource Center
Related News
Malibu Boats Inc (MBUU): Are Hedge Funds Right About This Stock? Should You Avoid Malibu Boats Inc (MBUU)? 11 Countries With The Worst Modern Music In The World The Top 5 Robo Advisor Apps of 2018 Five Reasons You Need a Day-Trading Mentor
Billionaire Hedge Funds