Is Macy’s, Inc. (NYSE:M) Going to Burn These Hedge Funds?

Before we spend days researching a stock idea we’d like to take a look at how hedge funds and billionaire investors recently traded that stock. S&P 500 Index ETF (SPY) lost 8.7% through October 26th. Forty percent of the S&P 500 constituents were down more than 10%. The average return of a randomly picked stock in the index is -9.5%. This means you (or a monkey throwing a dart) have less than an even chance of beating the market by randomly picking a stock. On the other hand, the top 25 most popular S&P 500 stocks among hedge funds had an average loss of 8.8%. In this article, we will take a look at what hedge funds think about Macy’s, Inc. (NYSE:M).

Macy’s, Inc. (NYSE:M) has experienced an increase in activity from the world’s largest hedge funds of late. However, this wasn’t enough for the company to be considered as one of the 30 most popular stocks among ALL hedge funds.

According to most investors, hedge funds are viewed as slow, outdated investment vehicles of yesteryear. While there are greater than 8000 funds in operation today, We look at the upper echelon of this group, approximately 700 funds. It is estimated that this group of investors command bulk of all hedge funds’ total asset base, and by observing their top equity investments, Insider Monkey has unearthed numerous investment strategies that have historically surpassed the market. Insider Monkey’s flagship hedge fund strategy beat the S&P 500 index by 6 percentage points per year since its inception in May 2014 through early November 2018. We were able to generate large returns even by identifying short candidates. Our portfolio of short stocks lost 26.1% since February 2017 even though the market was up nearly 19% during the same period. We just shared a list of 11 short targets in our latest quarterly update.

Macy’s said adjusted earnings for the quarter came in at 27 cents a share, a17% uptick from the year-ago period. Group revenues slid to 5.404 billion, while comparable store sales increased 3.3% on an owned-plus licensed basis. The iconic U.S. retailer forecasts full-year sales to grow between 0.3% and 0.7% and tied 15 cents to its prior earnings estimate of $3.95 to $4.15 per share. 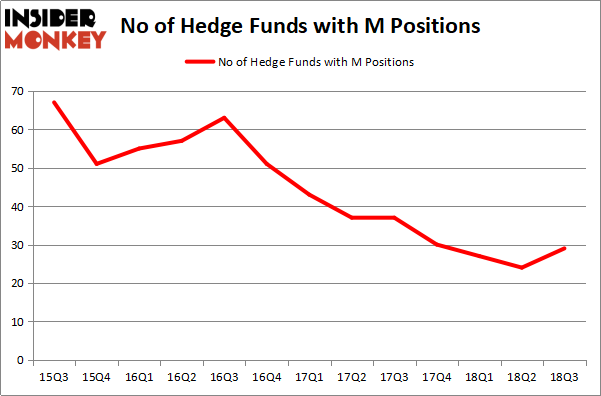 More specifically, AQR Capital Management was the largest shareholder of Macy’s, Inc. (NYSE:M), with a stake worth $242.8 million reported as of the end of September. Trailing AQR Capital Management was Two Sigma Advisors, which amassed a stake valued at $139.8 million. Citadel Investment Group, Impala Asset Management, and Arrowstreet Capital were also very fond of the stock, giving the stock large weights in their portfolios.

As you can see these stocks had an average of 29 hedge funds with bullish positions and the average amount invested in these stocks was $1394 million. That figure was $574 million in M’s case. Arconic Inc. (NYSE:ARNC) is the most popular stock in this table. On the other hand Cemex SAB de CV (NYSE:CX) is the least popular one with only 13 bullish hedge fund positions. Macy’s, Inc. (NYSE:M) is not the least popular stock in this group but hedge fund interest is still below average. This is a slightly negative signal and we’d rather spend our time researching stocks that hedge funds are piling on. In this regard ARNC might be a better candidate to consider a long position.