Is Luxoft Holding Inc (LXFT) A Good Stock To Buy?

The 700+ hedge funds and money managers tracked by Insider Monkey have already compiled and submitted their 13F filings for the second quarter, which unveil their equity positions as of September 30. We went through these filings, fixed typos and other more significant errors and identified the changes in hedge fund positions. Our extensive review of these public filings is finally over, so this article is set to reveal the smart money sentiment towards Luxoft Holding Inc (NYSE:LXFT).

Luxoft Holding Inc (NYSE:LXFT) shares haven’t seen a lot of action during the third quarter. Overall, hedge fund sentiment was unchanged. The stock was in 13 hedge funds’ portfolios at the end of the third quarter of 2018. At the end of this article we will also compare LXFT to other stocks including Progress Software Corporation (NASDAQ:PRGS), Synaptics Incorporated (NASDAQ:SYNA), and Usa Compression Partners LP (NYSE:USAC) to get a better sense of its popularity.

What does the smart money think about Luxoft Holding Inc (NYSE:LXFT)? 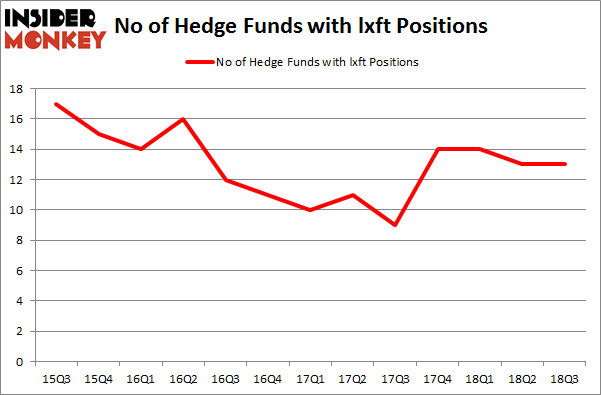 More specifically, Sunriver Management was the largest shareholder of Luxoft Holding Inc (NYSE:LXFT), with a stake worth $31.1 million reported as of the end of September. Trailing Sunriver Management was Kerrisdale Capital, which amassed a stake valued at $26.2 million. Hawk Ridge Management, GLG Partners, and Sheffield Asset Management were also very fond of the stock, giving the stock large weights in their portfolios.

Because Luxoft Holding Inc (NYSE:LXFT) has experienced falling interest from the smart money, it’s easy to see that there were a few money managers that decided to sell off their entire stakes heading into Q3. Intriguingly, Clint Carlson’s Carlson Capital sold off the biggest stake of the “upper crust” of funds watched by Insider Monkey, comprising an estimated $18.4 million in stock, and Israel Englander’s Millennium Management was right behind this move, as the fund cut about $6.1 million worth. These bearish behaviors are interesting, as aggregate hedge fund interest stayed the same (this is a bearish signal in our experience).

As you can see these stocks had an average of 15.25 hedge funds with bullish positions and the average amount invested in these stocks was $111 million. That figure was $139 million in LXFT’s case. Progress Software Corporation (NASDAQ:PRGS) is the most popular stock in this table. On the other hand Usa Compression Partners LP (NYSE:USAC) is the least popular one with only 5 bullish hedge fund positions. Luxoft Holding Inc (NYSE:LXFT) is not the least popular stock in this group but hedge fund interest is still below average. This is a slightly negative signal and we’d rather spend our time researching stocks that hedge funds are piling on. In this regard PRGS might be a better candidate to consider a long position.