The government requires hedge funds and wealthy investors with over a certain portfolio size to file a report that shows their positions at the end of every quarter. Even though it isn’t the intention, these filings level the playing field for ordinary investors. The latest round of 13F filings disclosed the funds’ positions on September 30. We at Insider Monkey have made an extensive database of more than 700 of those elite funds and prominent investors’ filings. In this article, we analyze how these elite funds and prominent investors traded Lumentum Holdings Inc (NASDAQ:LITE) based on those filings.

Is Lumentum Holdings Inc (NASDAQ:LITE) a sound investment now? Prominent investors are in a pessimistic mood. The number of bullish hedge fund bets retreated by 3 in recent months. Our calculations also showed that lite isn’t among the 30 most popular stocks among hedge funds. LITE was in 33 hedge funds’ portfolios at the end of the third quarter of 2018. There were 36 hedge funds in our database with LITE positions at the end of the previous quarter.

What have hedge funds been doing with Lumentum Holdings Inc (NASDAQ:LITE)?

Heading into the fourth quarter of 2018, a total of 33 of the hedge funds tracked by Insider Monkey were bullish on this stock, a change of -8% from the previous quarter. The graph below displays the number of hedge funds with bullish position in LITE over the last 13 quarters. With the smart money’s sentiment swirling, there exists a few noteworthy hedge fund managers who were boosting their stakes considerably (or already accumulated large positions). 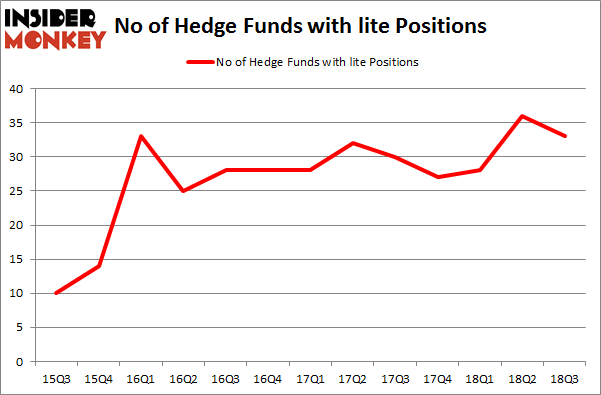 According to publicly available hedge fund and institutional investor holdings data compiled by Insider Monkey, Millennium Management, managed by Israel Englander, holds the largest position in Lumentum Holdings Inc (NASDAQ:LITE). Millennium Management has a $47.2 million position in the stock, comprising 0.1% of its 13F portfolio. Sitting at the No. 2 spot is Polar Capital, managed by Brian Ashford-Russell and Tim Woolley, which holds a $26 million position; the fund has 0.2% of its 13F portfolio invested in the stock. Remaining peers that are bullish contain Ken Griffin’s Citadel Investment Group, Jim Simons’s Renaissance Technologies and Nick Niell’s Arrowgrass Capital Partners.

Due to the fact that Lumentum Holdings Inc (NASDAQ:LITE) has faced declining sentiment from the entirety of the hedge funds we track, logic holds that there is a sect of hedgies that slashed their entire stakes heading into Q3. At the top of the heap, Alex Sacerdote’s Whale Rock Capital Management said goodbye to the largest position of the “upper crust” of funds watched by Insider Monkey, worth close to $54.4 million in stock, and John Hurley’s Cavalry Asset Management was right behind this move, as the fund said goodbye to about $12.6 million worth. These bearish behaviors are interesting, as aggregate hedge fund interest was cut by 3 funds heading into Q3.

As you can see these stocks had an average of 23 hedge funds with bullish positions and the average amount invested in these stocks was $324 million. That figure was $197 million in LITE’s case. Louisiana-Pacific Corporation (NYSE:LPX) is the most popular stock in this table. On the other hand Tetra Tech, Inc. (NASDAQ:TTEK) is the least popular one with only 17 bullish hedge fund positions. Compared to these stocks Lumentum Holdings Inc (NASDAQ:LITE) is more popular among hedge funds. Considering that hedge funds are fond of this stock in relation to its market cap peers, it may be a good idea to analyze it in detail and potentially include it in your portfolio.

Should You Buy Marsh & McLennan Companies, Inc. (MMC)?
Monthly Newsletter Strategy
Download a free copy of our newsletter and see the details inside!
Hedge Fund Resource Center
Related News
Lumentum Holdings Inc (LITE) Pulls Back To Support And Provides A Nice Risk/Reward Opportunity Is Lumentum Holdings Inc (LITE) A Good Stock To Buy? Was Quentec Asset Management Right to Bet on Micron Technology, Inc. (MU), Fabrinet (FN), & Others Here’s Why These Five Stocks Are in the Spotlight Big Things Are Expected of These Stocks Five Stocks that Are Surging While the Market is Mired in Red The 10 Best Islands to Visit in 2019 5 Most Socially Responsible Companies in America 5 Ways You Can Eliminate Credit Card Debt
Billionaire Hedge Funds