As we already know from media reports and hedge fund investor letters, many hedge funds lost money in October, blaming macroeconomic conditions and unpredictable events that hit several sectors, with healthcare among them. Nevertheless, most investors decided to stick to their bullish theses and their long-term focus allows us to profit from the recent declines. In particular, let’s take a look at what hedge funds think about Lululemon Athletica inc. (NASDAQ:LULU) in this article.

Lululemon Athletica inc. (NASDAQ:LULU) has experienced an increase in hedge fund interest recently. Our calculations also showed that LULU isn’t among the 30 most popular stocks among hedge funds. 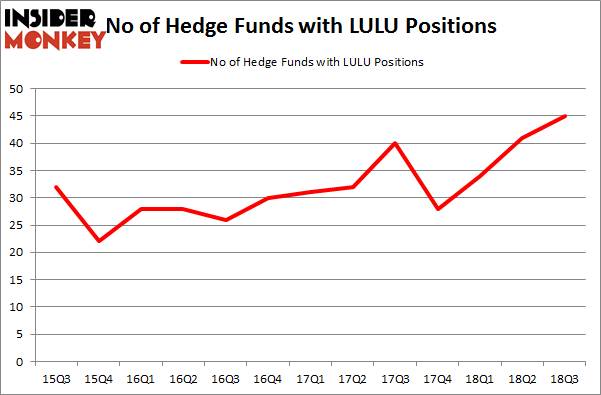 Among these funds, D E Shaw held the most valuable stake in Lululemon Athletica inc. (NASDAQ:LULU), which was worth $302.5 million at the end of the third quarter. On the second spot was Two Sigma Advisors which amassed $300.7 million worth of shares. Moreover, AQR Capital Management, Arrowstreet Capital, and Citadel Investment Group were also bullish on Lululemon Athletica inc. (NASDAQ:LULU), allocating a large percentage of their portfolios to this stock.

Consequently, some big names were breaking ground themselves. Sandler Capital Management, managed by Andrew Sandler, initiated the most valuable position in Lululemon Athletica inc. (NASDAQ:LULU). Sandler Capital Management had $11.8 million invested in the company at the end of the quarter. Steven Boyd’s Armistice Capital also made a $8.1 million investment in the stock during the quarter. The other funds with brand new LULU positions are Frank Slattery’s Symmetry Peak Management, Jamie Mendola’s Pacific Grove Capital, and Matthew Hulsizer’s PEAK6 Capital Management.

As you can see these stocks had an average of 30.5 hedge funds with bullish positions and the average amount invested in these stocks was $1.26 billion. That figure was $1.65 billion in LULU’s case. Hess Corporation (NYSE:HES) is the most popular stock in this table. On the other hand Cerner Corporation (NASDAQ:CERN) is the least popular one with only 25 bullish hedge fund positions. Compared to these stocks Lululemon Athletica inc. (NASDAQ:LULU) is more popular among hedge funds. Considering that hedge funds are fond of this stock in relation to its market cap peers, it may be a good idea to analyze it in detail and potentially include it in your portfolio.